Getting Re-Introduced To Birch Trees - January 2023 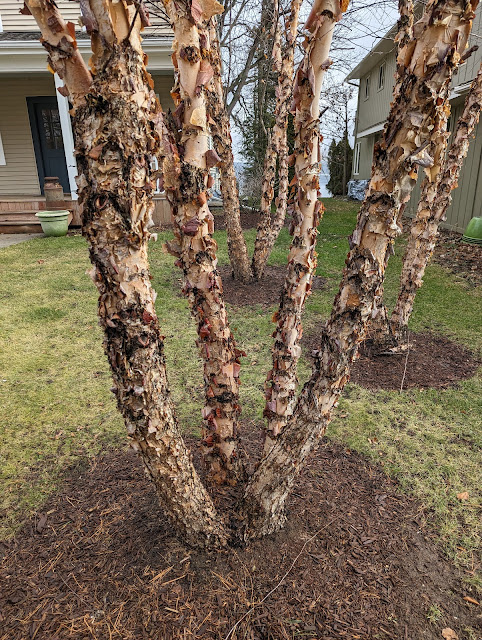 One of the great joys of keeping a garden journal or garden diary is that it allows you to see how much you've changed over the years.  The changes happen with growth and die-back of the plants, but also in your tastes and preferences of plant materials.  That's certainly happened to me as I've gotten to know trees and plants and both what works and what doesn't.  But also, what is the *right* plant (natives, drought-tolerant) and what might be the *wrong* plant (invasive or short-lived).

Take for instance the flowering pear tree.  When I started, I was so excited and proud to plant a small, $5 Cleveland Pear tree in our old yard.  It thrived.  So much so, that I bought even more of them.  Little did I know (at the time) that they're both NOT great trees in terms of longevity, but also...if you get the wrong variety...they're invasive.

I even went so far as to plant a couple at our new house when we moved.  Would I plant those today?  I don't think so.  But, they're here and growing.  I *do* have a decision to make IB2DWs, but that might wait another year or two.

A more recent change or evolution in thinking (or appreciating) that I've made in the garden is around ferns.  I was an Ostrich Fern guy.  Loved them.  They were so easy.  They multiplied.  But then...I got to know other fern varieties.  And have begun to realize that I could get MORE out of plants like the Autumn Fern than I could with Ostrich Ferns.

A tree species that I've recently been thinking about - and perhaps changing my perception of - is the Birch tree.  Specifically...the 'clump' Birch tree that has a little grouping of trunks.  I inherited one of those in our backyard and have watched it over the years.  I see clumps of River Birch sold seasonally at the Orange Big Box store parking lot nursery, which (now) puts up my radar.  I recognize that very often, they carry what sells and they can make money on - not what is the right tree.  So, my guards are up when it comes to River Birches.

But, I've also lusted after a columnar birch here on the blog and talked about how there's some appeal for me there.  But, they really weren't on my radar - that much.

Then...a few things happened.  First...I saw this clump of Birch trees up in Wisconsin that was putting-on quite the Winter show.  Not with foliage.  But, with bark.  Exfoliating bark.  See the very top of this post and a few photos below for the attention-getter: 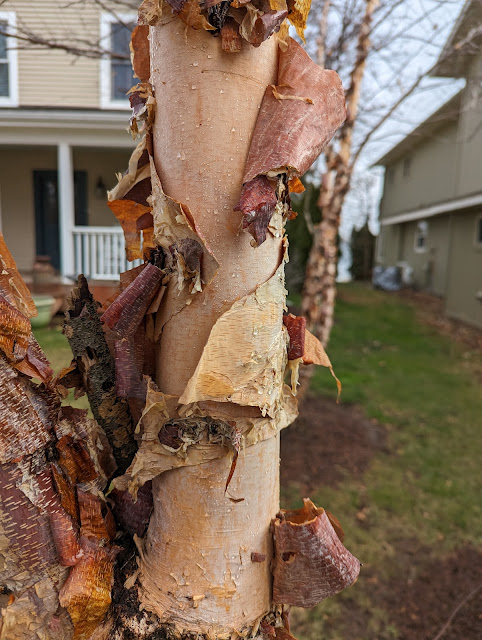 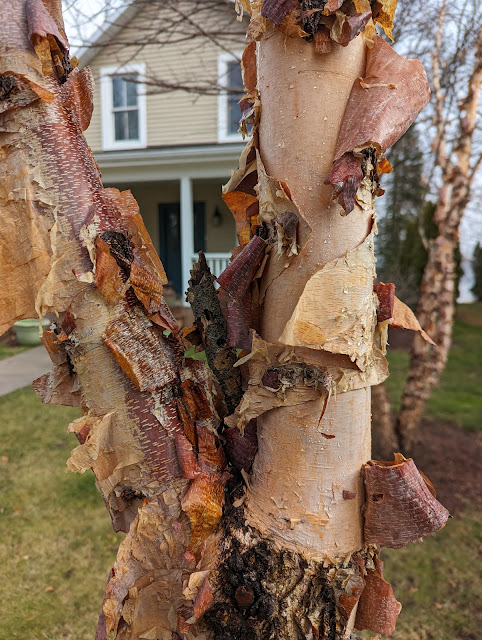 Because of that, I went looking around the Web and came across this page from the Morton Arboretum where they talk about the River Birch:

River birch is a popular, fast-growing native tree for the home landscape. Attractive salmon-pink to reddish-brown bark exfoliates to reveal lighter inner bark. Dark green foliage turns a beautiful buttery yellow in the fall. This species is resistant to bronze birch borer (BBB). This species is native to the Chicago region according to Swink and Wilhelm’s Plants of the Chicago Region, with updates made according to current research.

I also remembered that one of the gardeners who I learn from online (Erin the Impatient Gardener) had posted some videos about planting birch trees in pots this season.  She planted small ones - that's interesting.

Things were coming into focus.  I then remembered that a plantsman (Matt Mattus) that Erin has pointed to in the past (and that I now follow) has posted about birches, too.  Talking about the bark.  Look at this post.  And...I've observed another gardener on Insta - Nick McCullough - features Birch trees in designs, but also in (what I think) is his own garden.

If *those three* were all growing Birch trees, it seems that they're worthy of getting to know, right?

I then went to see if the Chicagoland Grows team has anything to say about Birches.  Sure enough...they have two species in their program including this small-sized "Fox Valley Birch".

Welp, it seems that when I build the list of trees that I want to add this year, a Birch might just be on the list.