This Fall, I made a pretty big change in my fern thinking.  I've long talked about how shade gardening is where I find my joy and how hostas and ferns have emerged as my favorite plants in the garden.  And, my first love with ferns was the Ostrich Fern.   I inherited some Ostrich Ferns back in Elmhurst and -for the first time - had success with ferns.  They grew, stood up and even multiplied.  I shared them with my mother-in-law and she grew them in her shade garden successfully.  And, I fostered some of them over there, too.  I even brought some to our house in Downers Grove - including collecting some from my sister-in-laws's teardown garden.

Over the years, I've moved them around and have transplanted them in some spots - including under the tree swing tree and on the side of our house.  I've historically tried to use them *AS MUCH AS I COULD*.

But, then...the change I mentioned above happened.  I started noticing that the Ostrich Ferns weren't performing like some of the other ferns that I've added to the garden.  And..the real standout was Autumn Ferns.  They were ferns that didn't die back in the late Summer and put on a border-line evergreen show in the garden.   I also was observing some other ferns - and began to divide them - in places like these Shaggy Shield Ferns and these Ghost Ferns.

I decided - this Fall - to lean into the Autumn Fern as a total replacement for the Ostrich Fern.  I bought 18 tiny ferns this Fall and planted them in the garden.   And I saw the three that I have in place continue to shine.

In December - around Christmas-time, we had a DEEP, DEEP freeze.  Sub-zero temps with negative thirty wind chills.  Everything that was showing the tiniest bit of life (like the Oakleaf Hydrangeas) wilted hard.  But the Autumn Ferns?  Still green.  Yeah...green.  See below for the initial three Autumn Ferns after an extended negative zero temperature exposure this Winter: 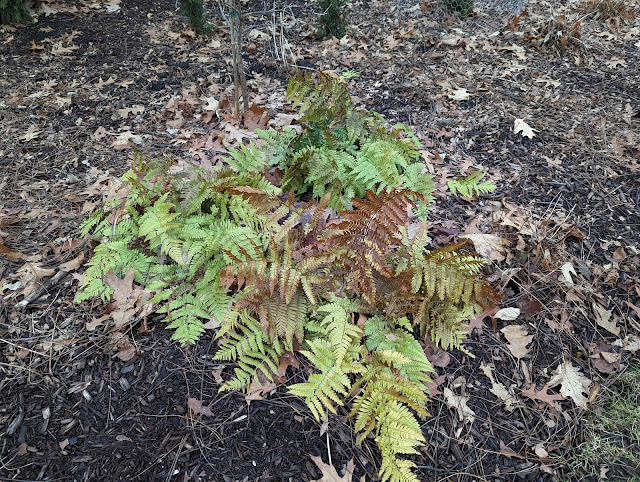 The little ones that I planted this Fall?  They've been eaten a bit by the (dang) rabbits.  But...they're still here.  And...ALSO STILL GREEN.  See below for a peek at some of those Autumn Fern plugs: 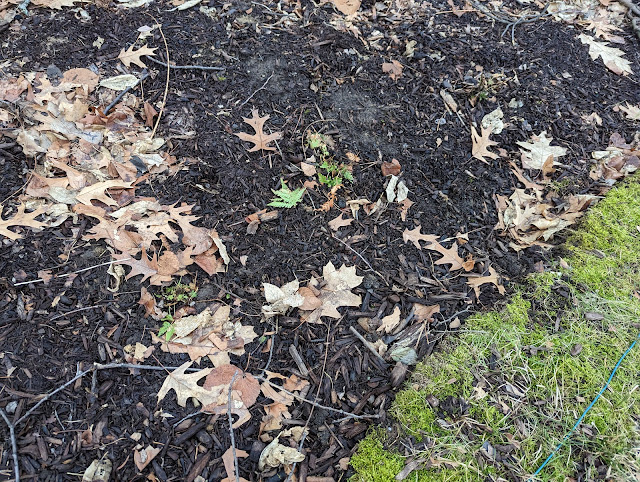 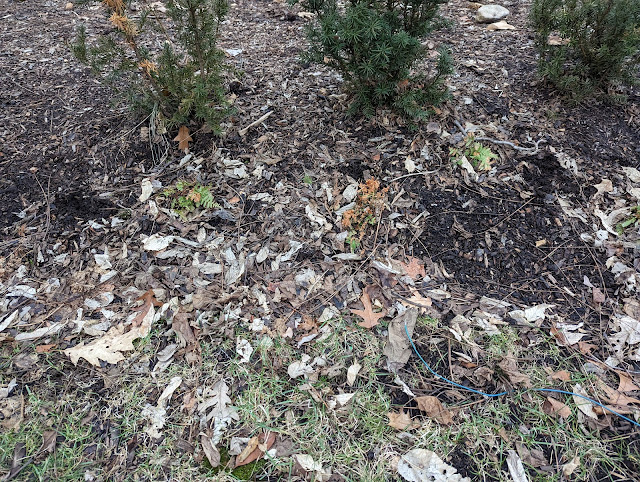 The photo above shows the twelve ferns that I planted in front of the Hicks Yews hedge in the far back.  I'm pretty sure that I'll likely leave these here this year and let them grow up and out, but I think this area needs another layer - once the Yews grow up.  I'm thinking of planting something like a flowering shrub IN FRONT of the Yews, with the ferns at the feet of those shrubs.  But, I'm certain that my priorities for planting this season will be elsewhere, so I'll use the 2023 season to let these beef-up and get established.

But, that also means that I have some thinking about what to do with the Ostrich Ferns.   Despite the fact that I've totally switched lanes with ferns doesn't mean I don't think Ostrich Ferns lack a place in my garden.  The very far back - which is somewhat naturalized - seems like a really great place to put some of these and allow them to mulitply on their own.  A potential project for this Spring - dig up and transplant the Ostrich Ferns under the tree swing tree to the far back - by the fire pit - to get them going back there.