Starting all the way back in 2010, I have documented the re-emergence of the pink peony tips as they peek out of the mulch in our flower beds.  When we lived in Elmhurst, our yard was MUCH smaller, but also it was full sun.  That meant that we could have quite a few peony plants that would throw off flowers that Nat could cut and bring inside.

Once we moved to Downers, peonies haven't been a focus.  And that's due to the shade garden we have in our yard.  We have a series of peonies that we've planted - including some teardown peonies, but none of them have ever flowered.

Here's one of them as they peeked thru this past weekend: 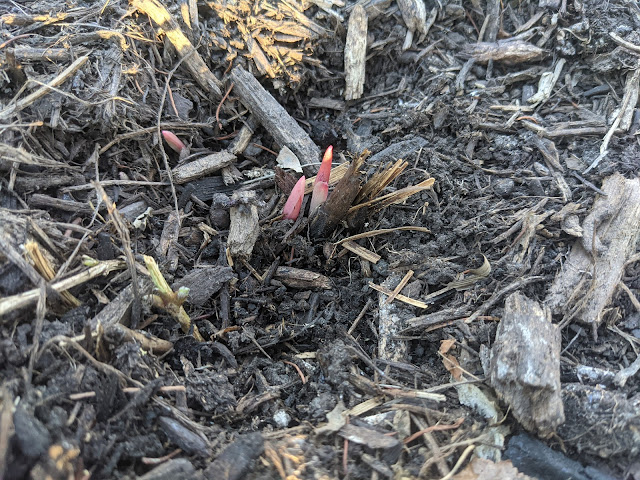 Here are these same peonies in 2020.  I think these are the 'teardown' ones, but I also planted some new ones as tubers back in 2018.  Back in 2019, I did a roundup of all the peony plants on the property here and one of them even flowered?!?  I don't remember that at all.

Well, I've been thinking that we either have to move the peonies out into the sun in the backyard OR move them to one of two places:

1.  The south side of the house, in front of the fence, close to where I recently transplanted the Disneyland Rose.

Both locations have certain appeal in terms of location - the first one would begin to confirm where that sideyard is headed:  into something of a cut flower garden.  Also, the location against the foundation is already there and mulched.  But, it is part of our yard that we don't enjoy.

The 'in between two driveways" location is one that we would see A LOT, so that has appeal, but it requires a bit more thought as the bed needs to be created.  That's not a deal-killer, but is just a consideration.