I normally don't mind shoveling our driveway, front walk and sidewalk that much.  We don't have a ton of square footage to do and I find the shoveling to be somewhat therapeutic - especially this season as I' not getting out of the house too much.  I *had* a snowblower, but sold it on Craigslist because I found that I wasn't using it, it was getting old and cranky and it took up A LOT of space in the garage.

I use a wide shovel from Menards that I bought last season and I've found that good shovels have a life of a couple of seasons before I want to replace it.  Usually the metal edge gives away.

It is becoming hard to find spots to put the snow now and our driveway is probably six or seven feet narrower than it is normally because I stopped clearing to the edges.  I wanted to mark the snow situation on the blog here because this being our fourth Winter in the house in Downers Grove, this has been the year with the MOST snow by far.

Have a look at the photo below to see the part between our driveway and the new neighbor to the north.  The strip of land is probably 12-15 feet wide and we BOTH are throwing our snow on it.  A few things to note in the photo:

First, the yellow stake.  That marks the edge of the driveway.  I put it in so I know where to shovel back to.  You can see there is more than a couple of feet of snow pile on the driveway now.  Also, that is a 48" tall marker.  Now, it is say six inches in the ground.  There's about 12" left on top of the snow indicating that there's about 30" or so of snow pile there.

Second:  on the right side of the photo, you can see the little Bald Cypress tree that I planted in September of 2018.  It may be hard to tell in the photo, but the first few levels of branches of the tree are UNDER the snow.

And third:  the stick-thin tree on the left is Red Fox Katsura tree that I planted last Fall.  The good news for that tree is that the rootball is buried DEEP in the snow and I would think pretty insulated from the cold temperatures that we've been experiencing. 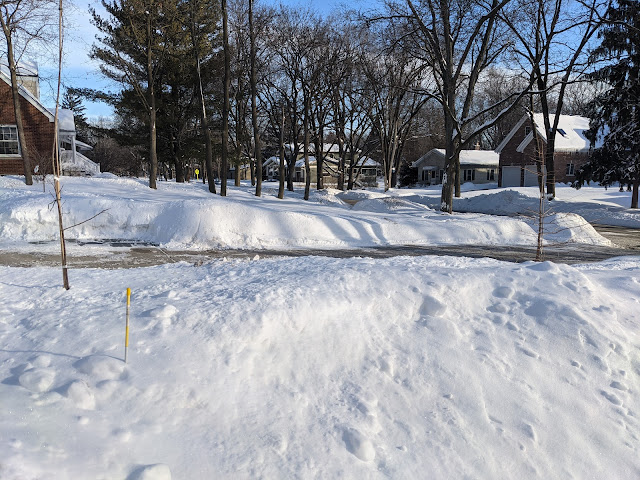