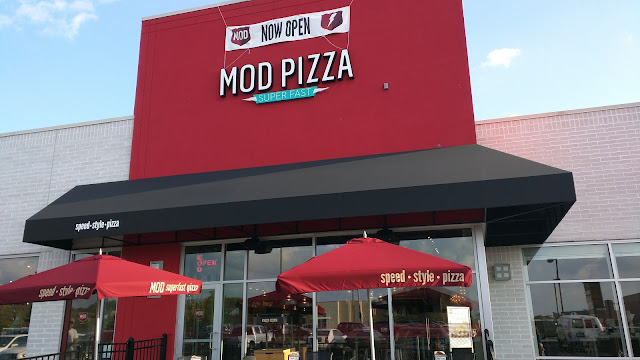 Last night we packed the kids up and went out to try Mod (or is it MOD?!?) Pizza on St. Charles Road near Route 83 in Elmhurst.  It is located in the same plaza as Total Hockey and Potbelly's on the south side of St. Charles.

Mod Pizza is best described as "The Chipotle of Pizza"; meaning you walk along the line with the pizza maker as they assemble your pie based on your choice of ingredients.  Nat and I both got the 'Mod size', which is the normal size, but they also have a kids size that is a bit smaller.

What's interesting is that DIRECTLY across the street from Mod is a newly opened PieFive Pizza - which, I think, is the exact same concept.  What happened with burgers three years ago (lots of burger places opened) and fro-yo two years ago (four fro-yo places opened in town!), appears to be happening with the quick-serve pizza concept.  We decided to try Mod first.  And it was pretty good - considering that they're just getting started with the restaurant.

Now...those of you pizza folks know that there is something of an efficient frontier in terms of the right number/amount of ingredients.  I think two or three plus the cheese is about the right amount.

Here's the line below.  They press the skins using a sheeter type of machine, then place the skin on top of a screen.  The paper below the screen is used to write your name/toppings on top.  There are a variety of sauces to pick from (red sauce, white sauce, garlic, etc) and plenty of ingredient choices.

It seems, however, that they haven't really localized the toppings to Chicago.  Mod is based out of Seattle and while for most places across the country, the topping choices they've laid out would normally be fine.  But here in the suburbs of Chicago?  I spotted two misses:

1.  The sausage looked ratty and certainly didn't have any fennel in it.  Source some local sausage, guys.  Please?
2.  They didn't offer giardiniera offered in the bar.  Come on!  You're right next to Potbelly's.  At least go right next door and pick up a jar and have it for folks.  I wouldn't have gotten it on my pie, but I see it more and more on pizzas around town and seems like a nice way to 'localize' the toppings a big. 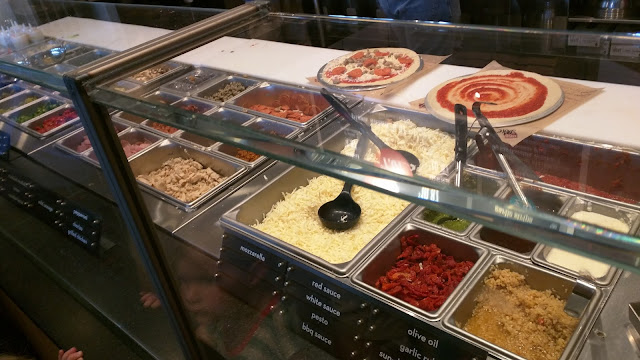 I went with pepperoni, bacon, salt/pepper, crushed red pepper and oregano.  As you can see, there's also basil on my pie below.  This is one of the things I *really* liked about Mod.  They offered basil on the normal part of the line - which would get you cooked basil, but they also offer a series of 'finishes' that they can add as the pies come out of the oven.  I dress my pizzas at home with basil when they come out of the oven, so I went with that.  Loved it.  Nat got a bit more adventurous and went with a fig/balsamic glaze.  She liked it! 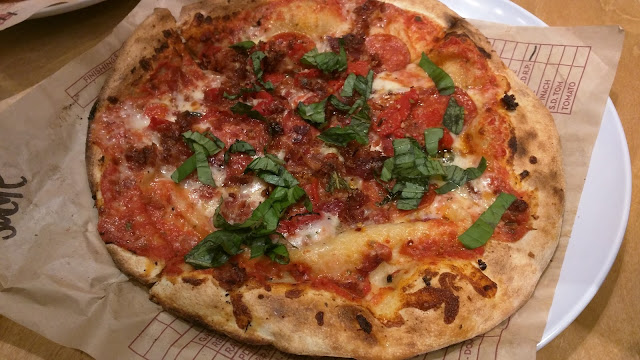 We also picked up a salad and I think that's going to be a big winner as this place grows.  It is a BIG metal bowl that you get to pick the same ingredients and build your own salad just like the pies.  They have feta at the end of the line, and for me?  Whenever there's feta at play in a salad, it is a tasty treat!

Nat and I liked our pizza and the Babe ate her entire four slice pie.  The Bird ate the cheese and pepperoni and salami off the top and moved on.

It wouldn't be a post here on the blog about pizza without a pizza 'upskirt' photo.  Here's the bottom of the skins.  They did a nice job cooking the pizzas.  The crust was a good combo of crunchy and a little big dough-y. 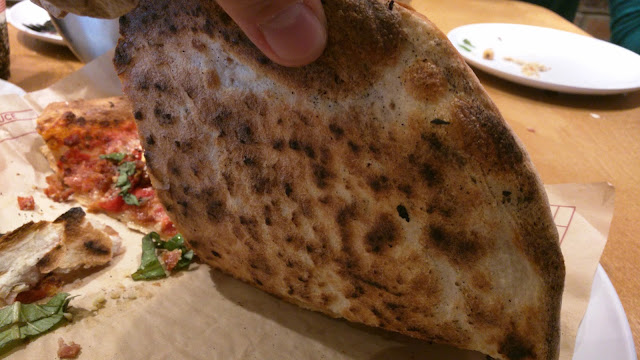 They also have a wide variety of drinks including the standard fountain setup but also a bunch of teas/lemonades that were quite tasty.

It wasn't super cheap, but it was a nice experience and we'll be back.  Of course, we'll probably have to try PieFive across the street first, but MOD has set the bar high for us.
2015 resolution chicago pizza snob city of elmhurst elmhurst everygoddamdamnday pizza real estate. elmhurst restaurants