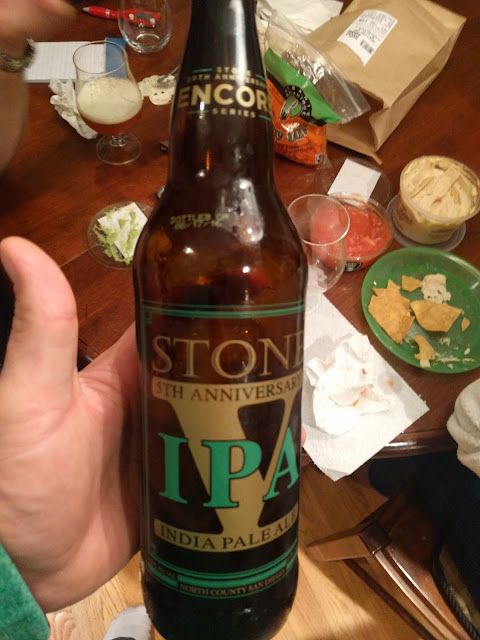 Another month, another craft beer tasting session with our good friend Dr. Jeff.  Here's the last session he hosted that focused on Sours.  And one from earlier this year where he toured us through various stouts.

This time, he took us on a tour of IPAs including a stop at what he called the "OG of West Coast IPAs", this 5th Anniversary Stone Brewing IPA.  This one scored a 93 on Beer Advocate, so he isn't fooling around.   It was interesting to taste a few different versions from Stone being that we were just at the Bavarian Lodge where Stone did a takeover.  Of course, Dr. Jeff was there on opening night as a good craft beer advocate *should* be.

Here's the story on the back of the big bottle: 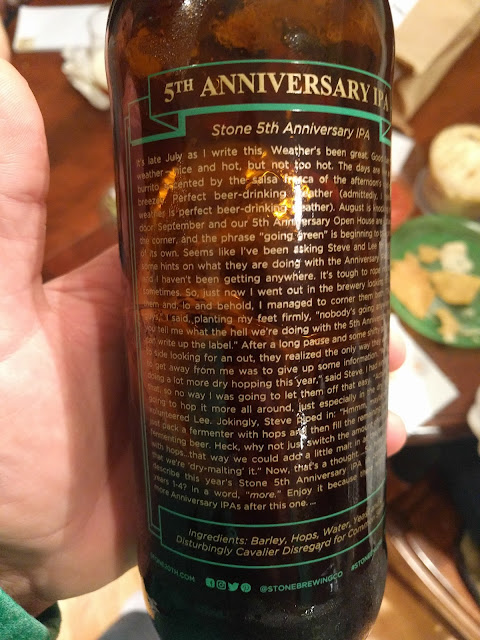 After that, he brought out a can of Heady Topper The Alchemist from Vermont.  This one has a score of 100!  I think that's the first 100 I've ever had.  And, maybe it was the age of this can, but I liked other beers better that night.   However, it was nice to have that 'coast-to-coast' journey. There were two others that I didn't snap pics of (one of which was SUPER fresh.  Like a week old and was tasty and almost citrus-flavored), but the last beer of night was this Escondidian Imperial Black IPA from Stone Brewing that was part of their 'encore series' to mark their 15th anniversary.  This one scored good, too.  But just a 93.  Tough to rank against a 100, right? 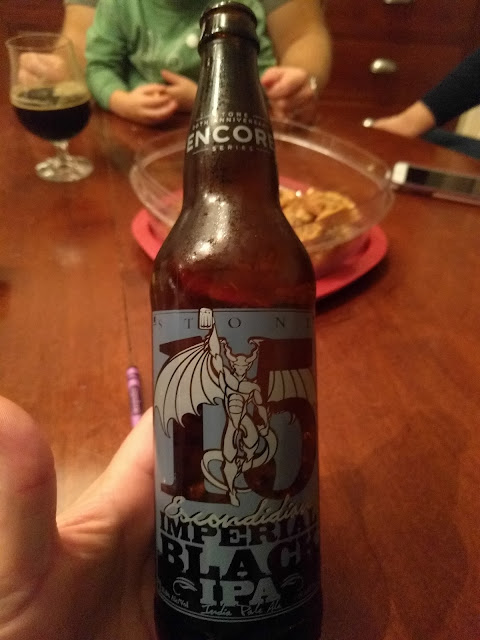 We seem to be doing these dinners a few times a year and I really like how he focuses on a line or region or style and teaches us some things about the makers and what we should be looking out for with each taste.  Kinda like wine snobs, but with craft beer, right?

Maybe we should be doing the same with pizza styles?  The problem is I'd run out after one night.
2016 resolution beer beer tastings craft beer Dr. Jeff
Location: Glen Ellyn, IL, USA