A few blocks over, the neighbors on Fairmount Street host an annual block party in September that features a Soapbox Derby.  This was our first time attending.  And it was great fun.  You can see the Bird riding along with one of the girls from the block in the video above to get a sense for the setup.  The neighbors on the block come together and put together quite an event starting with the starting gate/ramp.  There's a DJ and they had a food truck come out along with a keg, a snow cone maker and a lot of food.

Nat and I know just some people from our block, but we didn't know many folks from the neighboring streets - but we took the time to get to know a few new people and they couldn't have been more inviting.  This is a real, authentic family event.  It was really enjoyable.

The kids - and I am assuming - their fathers really showed a lot of creativity in designing the various cars involved.  There must have been more than 70 various cars built on various kits.  Some of them have big wheels and fancy setups, but most of the kits were old-fashioned and most likely from one source:  GoKit.

We were aware that the annual Soapbox Derby was coming up this fall, so after talking with a few Dads on the block, I went ahead and ordered a GoKit.  It was an interesting process.  At least I think it was.  You don't order online.  There is no online shopping cart.  Rather, you print out an order form and mail a check to a guy in Canada.  Yeah.  I can picture this old guy with a nice little hobby business that he fulfills orders that come in via the Canadian Post.  He then ships them out via USPS.  Ours had a signature notification attached to it, so it took a few tries for the postman to deliver it to us.

Sad, right?  I never found the time to get going on building out the kit.

But that didn't stop us from attending.  And riding in the cars.  A few guys on the block brought their cars out and were generous enough to allow our kids to get in them and drive them down the hill.

Here's a look at the race setup below.  The pairings were totally arbitrary and just depended who was in line next to you.  In some cases, it seemed like a few kids purposely tried to race each other.

And some of the cars were amazing.  Like...look at this one below.  Somebody did an amazing job with this Dumb and Dumber dogmobile, right?

They line the street with hay bales that both serve as barriers to stop out-of-control soapbox cars but also serve as places for people to sit.  Here's our girls watching their friends go down the hill. 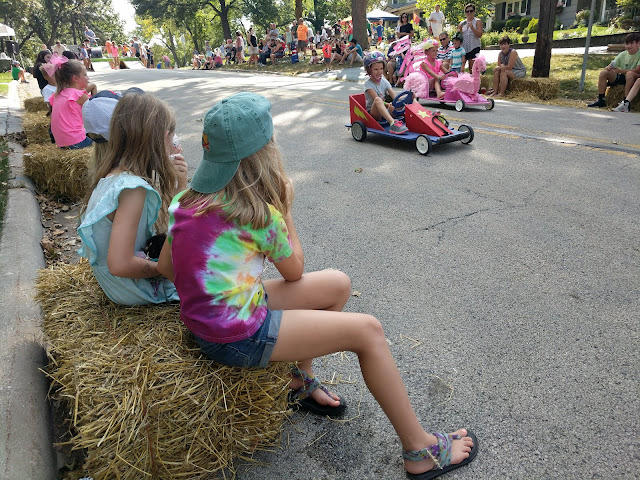 Having experienced it this year, I'm excited to work with the girls to develop our own car - and our own entry - into the Derby next year.  I'm hoping that one car will be enough and that they can agree on a theme.  I'm going to share the video with some friends that are handy, and who knows....maybe I can get them to come out to Downers with their own cars.  GlacierFox....I'm looking in your direction.

We're just getting acclimated to our new neighborhood and while there are lots of things we miss about Elmhurst, events like this, and neighbors like the ones we've met have made the transition a lot easier.