Birdbath installed by Feeders in our #NewOldBackyard 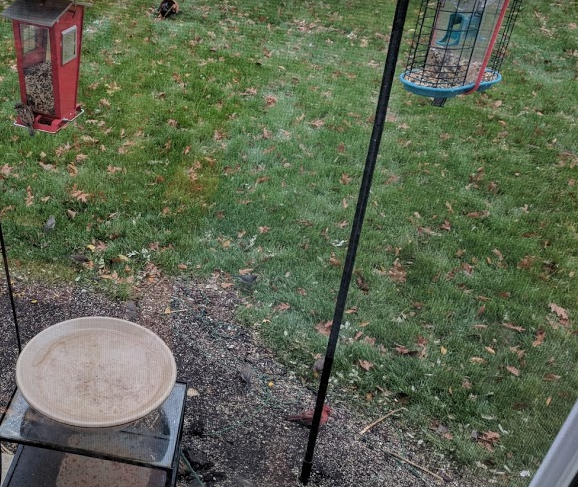 The kids and I recently upgraded our bird watching area with the introduction of our heated birdbath.  It is more like a re-introduction as we had this heated bath at our old house, but up until a week or so ago, it was just sitting in the basement.  We put it right next to a few of our feeders that you can see in the top part of this photo.  If you look closely, you can also see a very pretty cardinal right behind the pole on the right and a little bird - a finch of some sort, maybe? - on the feeder on the left.  We get a lot of yellow and black and brown little birds.  Finches, nuthatches, chickadees and pine siskins/  We also run a suet feeder right in this area, too so we're getting visits from woodpeckers despite us not having a tailprop version.   We're getting a lot of late fall/early winter action on these feeders and have, so far, stopped squirrels from owning all of them completely.  I still find a squirrel trying his best to get to these, but usually, the cage or weight traps foil them for the most part.  I also set up a 'big ole cob' on the other side of the lot, but the critters quickly absconded with it.

The bird feeders (and now bath) have become a father/child experience.  I work with the kids to fill the feeders and now the bath and they have enjoyed seeing our visitors as they eat their breakfast.

I've always been read/been told that while the birds certainly like the access to food and seeds, it is water that is the real draw.  So, if you create a regular supply of water (moving water, maybe?), you'll get better birds to your feeders.  We haven't seen a lot of action in the birdbath just yet, but maybe that's because we don't have a wiggler or dripper installed yet?  I posted about my old Water Wiggler back in 2013, but I threw it out after it died.  As I recall, it did work in attracting birds.  Maybe it is time for a new one?

I've also asked Nat for a horizontal roosting box that I can put up in the yard.  We have one birdhouse that I didn't get around to putting out this year, what with the move and all, but I'm planning on getting it up this Spring.  The roosting house, however, is probably going to be 'too late' for this winter's season as everyone will have probably found housing for the season already, but I'm hoping that we'll get some over-winter action in it next year.  I'm going to put it on the fence near our kitchen nook windows so we can see it in use and all the comings-and-goings.