The area that (earlier this Spring), I labeled "Priority Area #2" has begun to be addressed this Spring ahead of the mulch being applied.  Last year, I planted three Guacamole Hostas in this area that calls for nine total Guacamole Hostas and after I increased the bed size, it was time to add even more to get this area filled out.  Of the three that I planted last year, one of them has been having some trouble (with the cold weather + drought), so I decided to plant seven new ones - to bring the total to ten.  Nine + one troubled one.  Here (below) is the layout of these new Guacamole hostas in their nursery containers.  Four one gallon pots and three quart pots with smaller ones. 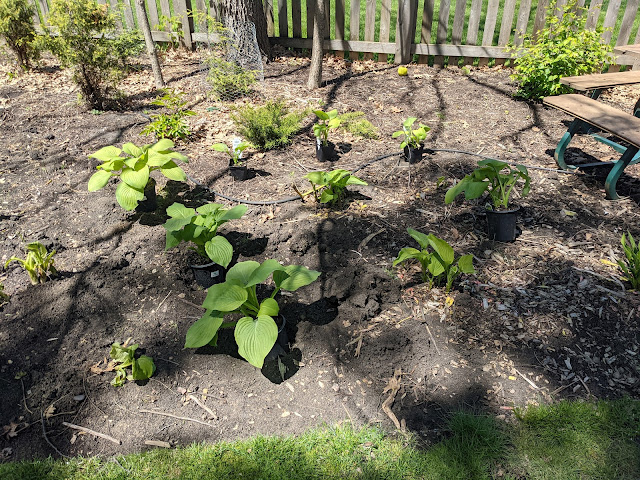 And, here below, is an annotated version of that same photo.

Red circle = 2020 planted hostas.
Green circle = new 2021 Guacamole hostas.  The four larger ones came from Hinsdale Nursery.  The smaller ones from Johannsen Farms in Bolingbrook.
Purple circle = one of the Praying Hands hosta.
Blue circle = transplanted hostas of unknown cultivar in a semi-circle at the edge of this new bed. 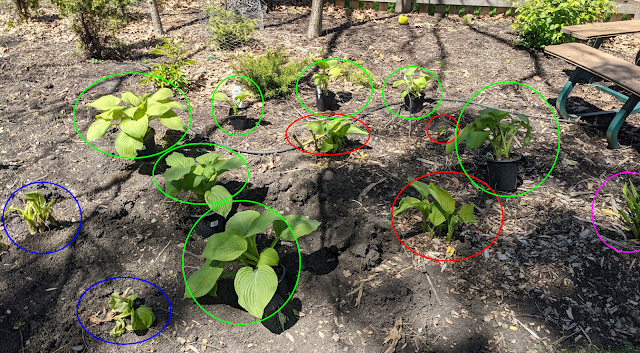 This area (priority area #2) calls for nine hostas, some additional Lenten Roses and Ligularia.  I was trying to add some Lenten Roses, but couldn't find them at prices that made sense, so I decided to focus on the balance of the items including these hostas.  Guacamole Hostas were the "Hostas of the Year" in 2002 and they change color over the growing season with their variegation occurring as time goes on.   By last August, they were "Green Apple green" and showing off a little bit.  Here's the plant tag front/back below: 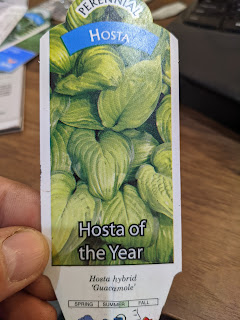 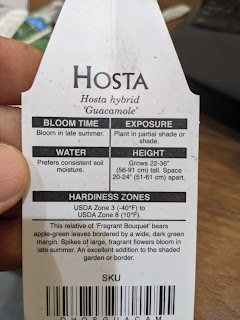