Posted by Jake Parrillo on March 21, 2010
Last weekend, we hosted a party for my Dad's birthday.  I made turkey meatballs for everybody but Vic - we made eggplant "meatballs" for her.  I'd share recipes here, but I just kind of 'winged' it.  The 'balls' turned out ok, but the real hit of the party was Crostini with Ricotta and Roasted Tomatoes.  They went fast and were very easy. 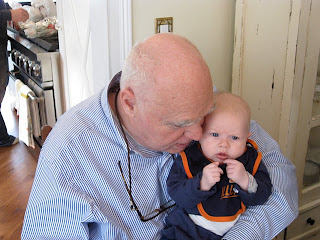 There's a very famous pizza place out in Arizona - probably the "most" famous pizza place called Pizzeria Bianco that is run by a guy named Chris Bianco.  Martha Stewart featured him either in her magazine or on her tv show (or probably both!) and included this recipe.   I went to Angelo Caputo's to do the shopping, so I came back with some house ricotta which made everything taste better!
The party was a lot of fun - and a real team effort.  We made some food, my sisters all brought something (including the birthday cake!) and my mom helped clean up.  Most importantly, we were able to gather as a family and "Papa" had time with all of his grandkids.  (well...one of them had a basketball game, so it isn't quite "all".) 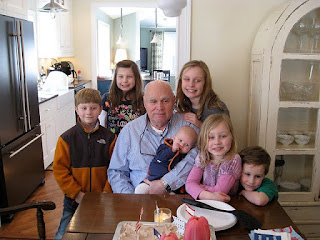