Posted by Jake Parrillo on March 06, 2010
I was driving by our bowling alley this morning in Elmhurst when I noticed these sign guys out front dealing with the new signage.  They're taking down the old sign that read "Seven Ten Lanes" and replacing it with one that reads "Fitz's Spare Keys".  For a bit there, the place was called "Fitz's Lanes", but  they didn't really change much besides the name itself. The signage all still read Seven Ten, the  menus still said Seven Ten and the Yelp listing still said Seven Ten.  (I snapped a picture for the Parrillo Family Elmhurst Historial archives*.  Pardon my finger.  The sun was in my eyes and the Nexus One's screen is terrible in daylight). 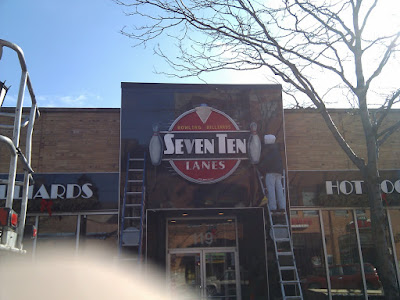 Hopefully the new sign means that the menu will get a makeover, too.  I love their food, but the wait staff is young (most likely from Elmhurst College), the menu has items that they"don't have any more", and occasionally a charge will show up on your bill that is wrong.

The place needs an identity - and hopefully the new "Fitz's Spare Keys" will work for them.  The "Keys" part is due to the fact that in addition to having lanes on 2 floors (Yes...there are private lanes in the basement!), they also have a huge piano bar area that features dueling pianos.  I'm not in the restaurant business, but it seems a bit incongruent.  They have this family-friendly bowling alley with great chow, then this pompous velvet-couched space for dudes in untucked-buttoned down shirts with spike-y hair.

Nat had - what I think is a - great idea.  They should separate the space into 2 distinct spots.  There's already a 'back' entrance and play the piano space up off of that- call it something to do with an alley.  Then keep the lanes family-focused.

As it is now - it is classic "straddling".  And...as we learn in business school:  straddlers usually fail.  Be something and be it well.  Don't try to be 2 things.

*no such archives exist outside of this blog!
daily elmhurst