Back to the Future 25th Anniversary Naperville

Posted by Jake Parrillo on April 30, 2010
Back in February, Nat and I went with some friends to a special screening on Back to the Future for the 25th Anniversary celebration in Naperville with a few stars of the movie.  All in all, it was a great night with great company and we even had a chance to spend some time with the original Jennifer Parker (Claudia Wells), Lorraine McFly Lea Thompson), Dr. Emmit Brown (Christopher Lloyd) and Principal Strickland (James Tolkan).  Thompson looked great.  Claudia Wells, on the other hand...well...I'll just say that I like Lea Thompson "better".

The theatre they screened the movie in was called the Hollywood Palms and is one of those places that serve a full menu of food while you watch the movie.  That was pretty nice having waiter service.  The only downside is that I sucked down a few beers and like 4 Diet Cokes so I had to get up anyway to head to the john 3 times!

In the lobby of the theatre, they have a bar - which in this situation (we arrived early and had to wait around) was quite useful.  They had a Delorean on display, which we snapped some photos in front of, but the "cutest" BTTF tie-in was the tip jars.  They were "save the clocktower" jars. 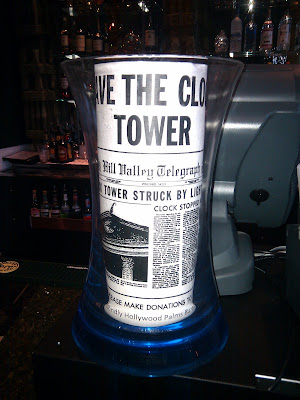