Posted by Jake Parrillo on April 23, 2010
I've always liked the tomatoes Lou Malnati's put on top of their pies.  They tended to have some chunk-age to them and provided nice bursts of flavor/juicy-ness when I bit into the slices.  In fact, as I started to experiment with my own deep-dish pizza recipes at home, Lou's was always the pie I aspired to ape.

I ended up using a combination of 6-in-1's and whole peeled (de-seeded) hand torn tomatoes.  They came pretty close to the real thing.

This past trip to Lou's, I spotted a note about their tomatoes on their menu.  (and...no!  This is not turning into a all-Lou Malnati's blog.) 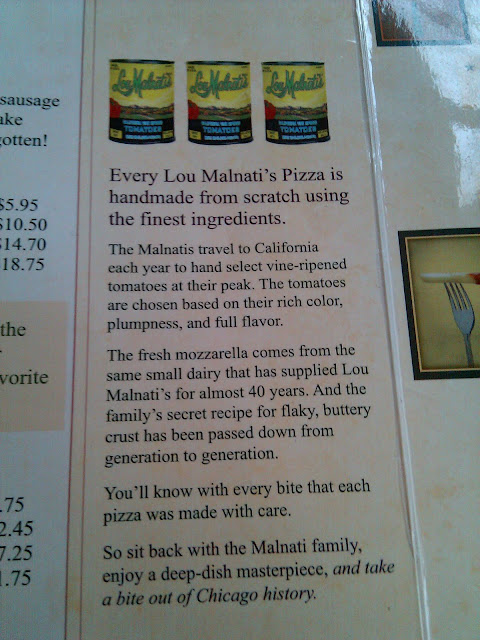 If you can't read it, it says:


The Malnatis travel to California each year to hand select vine-riped tomatoes at their peak.  The tomatoes are chose based on their rich color, plumpness, and full flavor.

From the photo in the menu, it seems like they can and label their tomatoes specifically for Lou's.  Wonder if they sell them like that?  Or...if they will?  Kind of like the way Potbelly's sells their giardiniera (that they for some reason call just "hot peppers"!).  As for the trip to California, sounds like a nice way to spend a vacation, eh?
daily dining out pizza