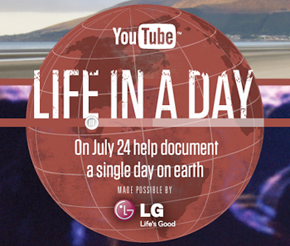 Today is YouTube's Life in a Day.  TODAY!

For those of you who don't initially know what that means, you can see more details on their YouTube Channel or the Official YouTube Blog post or on Facebook.  Alternatively, you can read my description below.

It really is a pretty cool concept (you guys do know that I work for Google, right?  They're paying me, but not paying me to promote this!) where ordinary people from around the world should whip out their Flip Cameras or mobile phone cameras and contribute a short bit of footage from their lives today.  In the end, Life in a Day will be turned into a feature-length documentary film that is set to be premiered at Sundance 2011.  And...if that's not cool enough, if your footage makes it into the final cut, you’ll be credited as a co-director and may be one of 20 contributors selected to attend the premiere.


There are some heavy hitters involved (Ridley Scott, Kevin McDonald) pulling the whole thing together.   They've asked for participants to focus on three things:


I’d also like contributors to think about three questions, and try and answer those questions. What makes you frightened? What do you love? And the last thing I want to do is have people reach into their pockets and record whatever it is they have in them and why.

So go get out there and film yourself or your wife.   You can submit the footage on the Life in a Day YouTube Channel.   If you do, and you know me, drop me a line.
blogging daily google youtube