Posted by Jake Parrillo on January 31, 2011
When we were up in Holland a last week, I made it clear that we had but one option for dinner that night: Fricano's, Too. We'd walked past it over the summer and I posted a shot of their sign which boasted that they were home to "The Original and Most Famous Pizza in Michigan".  At some point, someone chimed in with a comment on that original post shaming me for not going.


You should've made room for a Fricano's pizza that day! None of this American-ized, three-inch-thick, beef stew on a dough disc nonsense here! Fricano's are paper thin, 12" only, a little burnt around the edge of the home made crust, and is the best pizza you'll ever eat. I challenge you to NOT eat a whole one yourself!

It seems that this place has grown over the years and is clearly very popular with the locals.  We were there on a Tuesday or Wednesday night and the place was full.  Well...actually...it was only half full.  But...that's the weird part.  You enter into one side of the restaurant and are quickly pulled into this other part - far away from the entrance.  Perhaps on the weekends they use this other "newer" side?

We were seated in a booth and had a nice waitress.  When Nat asked for a menu, she was a bit surprised and pointed to this little sign on our table.  That *was* our menu. 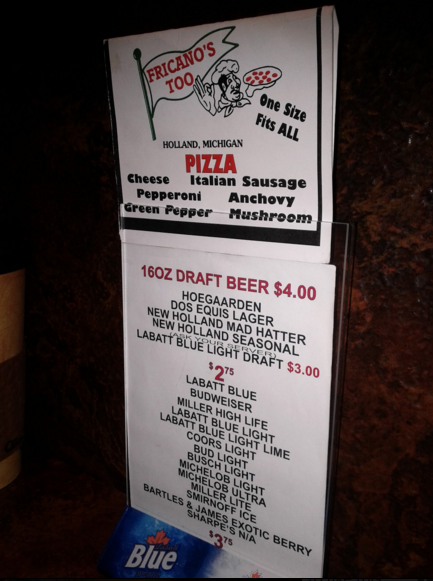 Fine.  I'm certainly no snob, so I don't mind a simple menu.  Pizza and beer.  But...that's seriously it.  Just pizza and beer.  No salads - which was a bummer to both of us, but we moved on.  They offer 1 size pie - I think a 12 incher.  Six toppings - order whatever you want.  Sounds like the regulars order something called a EBA - Everything But Anchovies.

Based on the comment - and a bit of guidance from the waitress, we ordered 2 pies.  One Sausage and Pepperoni and one Mushroom and Green Peppers.

When they arrived - they came as billed:  super thin and about 12 inches.  Seemed to be good looking.  But, they were pretty ordinary pies - tastewise.  I REALLY wanted to like this place - because they clearly care about their pizzas (and their history), but if anyone thinks this is the "Greatest" pizza in Michigan, they need to head 30 miles south and grab a bar stool at Silver Beach Pizza in St. Joe's. 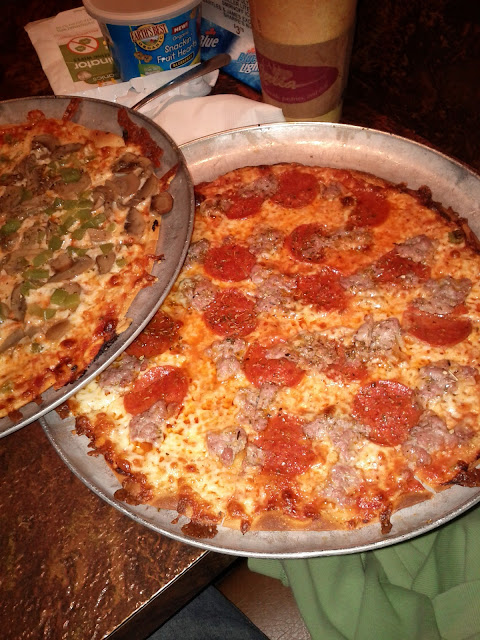 For posterity sake:  Here's a shot of the upskirt (below) - not to terribly brown and certainly NOT crisp! 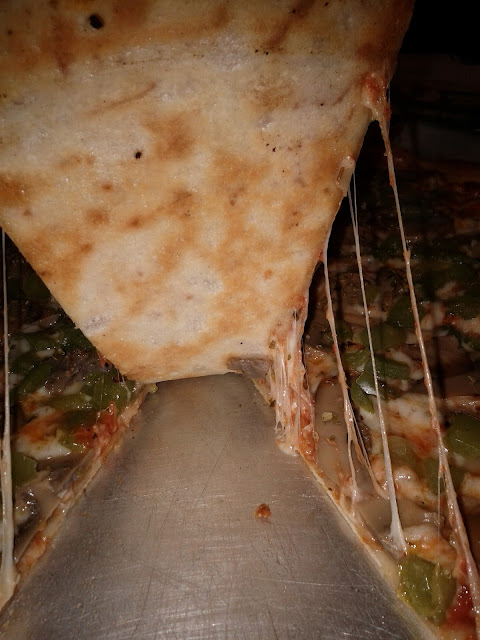 This might have been the best part!  These crispy edges of burnt/charred cheese were tasty! 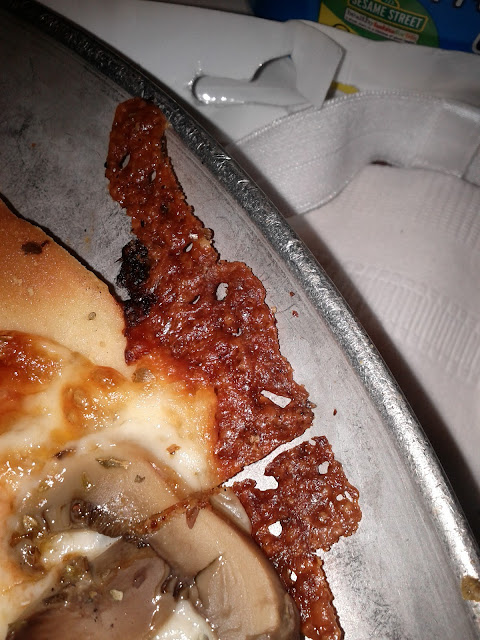