Posted by Jake Parrillo on January 30, 2011
Having made Tom Thayer's Italian Beef recipe twice in the past few weeks, I've been to the grocery store buying a lot of giardinera - as each batch calls for two bottles.  I've tried a lot of them, and I keep coming back to what is my favorite:  Scala's Original Giardinera.  At the local Jewel's, you have to be a savvy shopper to know where to find it because they keep it on top of the deli counter, not in the salad dressing aisle with the rest of the various giardineras (including Il Primo, Marconi, and others). 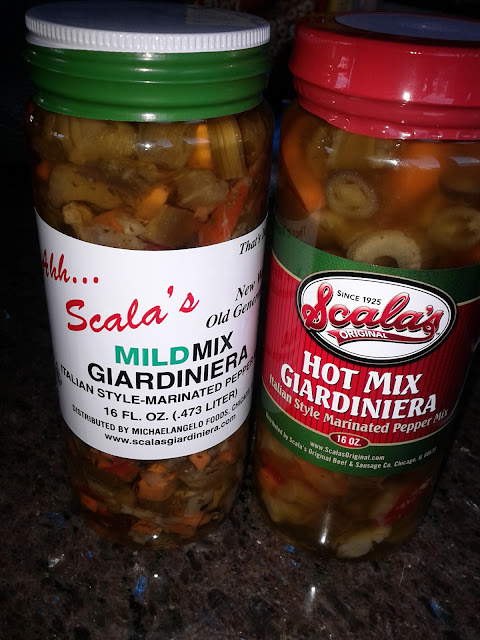 They've always had that distinctively generic white label you see on the left.  But, the last time I went to pick it up, the display (Which really is just a small basket of 8-10 jars) had both the white labels and this new, much more professional-looking red/green/white label and identity.

I don't love change, but in this case, I think the new look is an upgrade.  But...most importantly...they've only changed the jar - not the recipe.  The stuff no longer looks like it was made in a deli (too bad), but I won't stand in the way of progress!

For those wondering why I like Scala's the best?  It isn't just the flavor (which is good).  Unfortunately almost every giardinera these days are including olives (which I hate in mine!), but Scala's uses whole olives, so fishing them out is a lot easier!
chicago cooking giardinera pizza shopping