Amaranthus Seedlings - One Week In

Posted by Jake Parrillo on March 12, 2011
Well....that didn't take long.  Just late last week, I shared the news that in addition to trying some vegetable plants from seeds, I was also trying my green thumb at sowing flower seeds.  One of them that Nat picked out (she's the flower expert) was heirloom Amaranthus that I showed last week.

Along with a bunch of other flower seeds, these have really taken off.  The Amaranthus are the light purple ones in the foreground.  Right behind them are a variety of Cosmos - but that is for another post.  As often happens (I'm learning), it is now time to thin all of them out to allow the healthiest and strongest seedlings to flourish, but I hate to just throw the extra seedlings in the trash.  I'm going to try to make it to Menards soon to pick up more non-peat pods and maybe grow some of these to give away.  Maybe they'll find a home in some yards on our block or in Frankfort or Naperville. 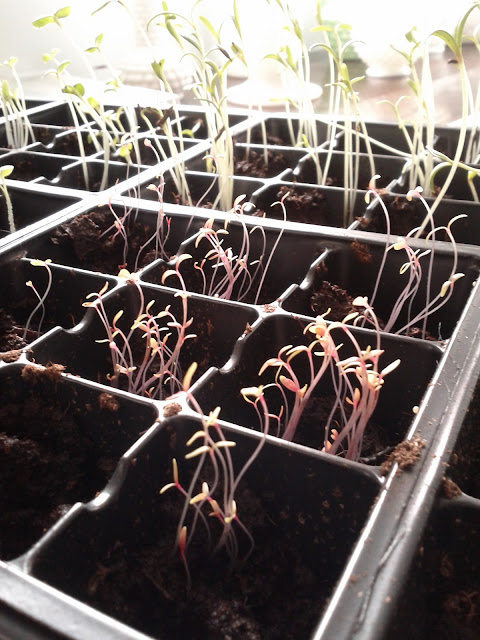 I've never attended a seed swap, but after hearing about them, I was wondering how people had "extra seeds".  The instructions that I found about seeds said to sow A LOT of seeds in each pod because "many" of them will not germinate.  After seeing this tray of seedlings, I know understand that the "A LOT" approach is probably not the right one - as you end up throwing a lot of seedlings away.  And...now the whole idea of a seed swap - and having extra seeds is making a lot more sense.
backyard flowers gardening outdoors