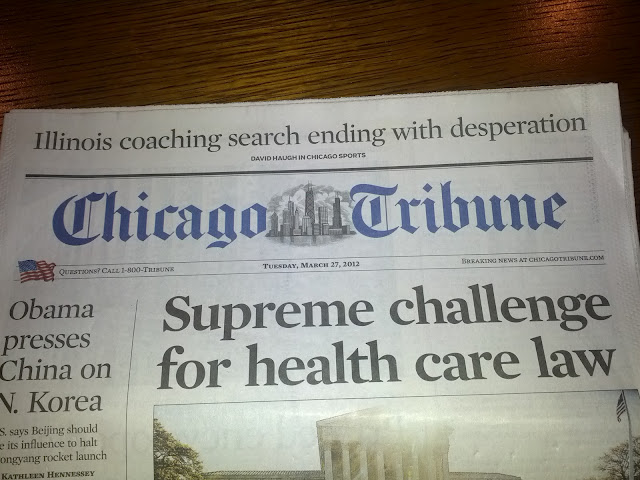 Opening up the paper this morning, we're greeted with this headline (at the top) about the University of Illinois mens coaching vacancy.  By all indications, it looks like we're going to hire Ohio University's John Groce (said "gross") to replace Bruce Weber.   While I'm going to be a Groce backer, I have to admit that I'm a bit let down.  After what seemed like shooting for the stars (Shaka Smart, Brad Stevens), if feels like our Athletic Director is taking a clone of his football pick Tim Beckman.  A smart, up-and-coming MAC coach.  Not sure that's quite desperation, but man-o-man does Groce have a hill to climb with fans.  The environment on the Illini message boards isn't all that positive.  (I have no historical recollection of what the reaction was to Bruce Weber?)  What can he do?  First things first:  win.  Then, after that?  Bring in some of that Ohio State magic in the form of assistant coaches and what not.  Everyone wants to retain "Snacks" (and so do I), it seems pretty clear to me that the guys at OSU have done a better job of recruiting than we have for the past six years.

If it is Groce, then I'm all in with him.   Not my first choice, but now he'll be my favorite.
basketball daily illini

Weeping White Spruce - Acquired But Not Planted (Yet)

I first came across a Weeping White Spruce tree via Laura @ Garden Answer on Youtube .  I've embedded her video below and have set it to start at 1:03 mark in the video where she talks about how they picked this tree out.  In particular, she talks about how we're not supposed to judge an evergreen by what it looks like as a 'baby tree'.    The Weeping White Spruce is a columnar evergreen and it is a weeping tree.  By now, you guys know I love columnar varieties of trees and are drawn to those because it means that I can pack more trees into the yard as they grow.   The first weeping conifer that I bought was last year was the Weeping Himalayan Cedar Tree that I planted about a year ago .  Earlier this month, I posted my concern for the tree as it had suddenly turned brown, but the good news is that it seems it has recovered and there is new, green growth all over the place .    I also added six ( but just three of them planted so far) Canadian Hemlocks to br
Read more