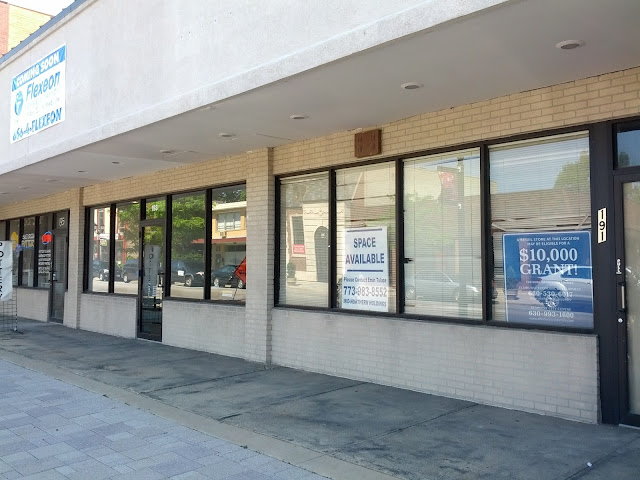 Just north of Second Street, North Avenue has very little going on for it.  Sure, there's Francesca's and City Hall and even a Fruit Bouquet place but on the east side, there's long stretches of vacant spaces.  And on the west side there's a weird hookah shop, a travel agency (really?), a store that sells pencils (I think?), a salon or two and even more vacant space.

But the west side of the street received some good news with the 'coming soon' sign at 193 N. York from Flexeon Rehab and Therapy.  They're going in just south of Salt Creek Pottery and just north of this vacant space where you see the $10K grant sign.  Flexeon is a nice addition - even though it isn't retail.  A healthy downtown needs a good mix of uses as they feed each other.  Flexeon will have patients come downtown who now might be there during the middle of the day and they could stay for lunch.  Or they could waste some time before their appointment and shop for some toys.  My only question about this space is parking.  There's a lot down on the corner and a lot of street parking, but wonder where folks are going to park?

There are a few more vacant spaces on the west side of York that I'm hoping will fill up.
daily downtown elmhurst elmhurst Elmhurst City Centre real estate

Back at the end of June, I added a coaster (and glass cover) to the #CoasterCollection here on the blog and kind of just glossed over the actual hotel.  Being a fan of old-school hotels, the lobby at the Roosevelt deserves a post of it's own here in my online/travel diary.  Check out the photo above to see the mosiacs, the fixtures and the all around glamour of the place.  They don't build hotels like this any more - in terms of the materials but also the space.  There is so much 'useless' space that isn't in rooms.  The areas around the elevators on the upper floors is generous.  Today? They'd build that space into the rooms.  There are these little weird half-floors that are totally NOT ADA-compliant.   And in keeping with the Waldorf-Atoria tradition of featuring significant clocks in their lobby , the Roosevelt has a beautiful piece called "The Paris Exhibition Clock.  Turns out, despite the clock being made in 1867, it has only called the Roose
Read more