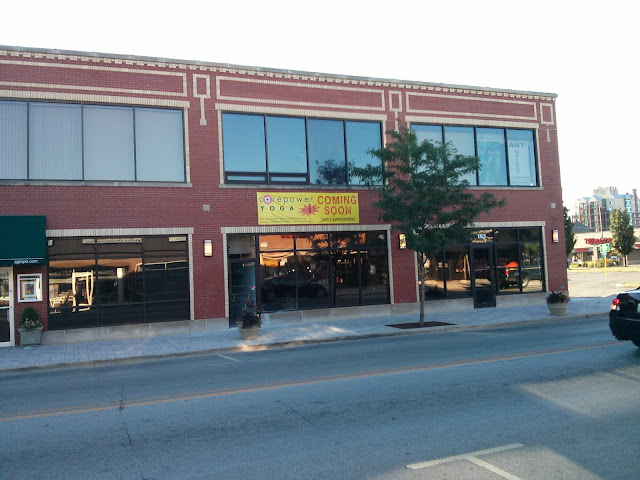 Walking by this building on York this am, I saw this big banner announcing the (soon to be) arrival of a new Yoga studio called "Core Power Yoga".  Their site lists the Elmhurst location as opening in October of this year.

This isn't some mom-and-pop Yoga place.  They're a big outfit.  In multiple states and have more than 15 locations here in Illinois including Hinsdale, Naperville, Oak Park and more.

The building is on the East side of York, just north of Palmer and is really big.  During the last Mayoral race, one of the campaigns operated out of the first floor and if I read the signs correctly, I believe there is an art gallery on the second floor.  That leaves me with the assumption that Core Power Yoga will be taking up the first floor/street level.

This is a really nice addition to downtown and should be a boost to the area north of Palmer.  There is a parking lot right next to the building, so guessing that the patrons will be able to drive right there and park - which is nice.

While I'm a firm believer that we need more retail in town, I understand that there are complimentary uses and that services and offices and residential drive more demand for retail and restaurants.  Hoping these guys succeed and have a long, fruitful life in the Elmhurst City Centre!
daily downtown elmhurst elmhurst city center Elmhurst City Centre real estate. elmhurst