If You Ever Go To Houston... (Or How One Of Bob Dylan's Records Evaded Me) 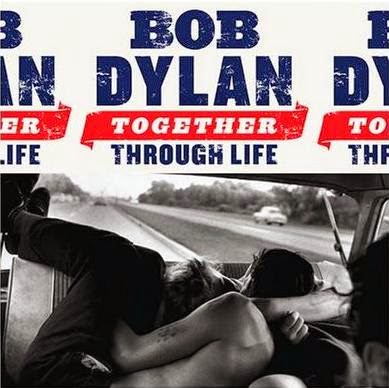 Where have I been?  Bob Dylan put out a record in 2009 called 'Together Through Life' that has evaded me for five years.  What have I been doing to ignore this?  Turns out...it charted at #1 in the US and the UK.  Really?  It is his 33rd studio album and includes his touring band and a guy named Mike Campbell from The Heartbreakers.  That's pretty cool.


Together Through Life is the thirty-third studio album by singer-songwriter Bob Dylan, released on April 28, 2009, by Columbia Records. The album debuted at number one in several countries, including the U.S. and the UK. It is Dylan's first number one in Britain since New Morning in 1970.

Dylan wrote all but one of the album's songs withGrateful Dead lyricist Robert Hunter, with whom he had previously co-written two songs on his 1988 album Down in the Groove. In an interview with Rolling Stone magazine, Dylan commented on the collaboration: “Hunter is an old buddy, we could probably write a hundred songs together if we thought it was important or the right reasons were there... He's got a way with words and I do too. We both write a different type of song than what passes today for songwriting.” The only other writer Dylan has ever collaborated with to such a degree is Jacques Levy, with whom he wrote most of the songs on Desire.


I'm a big fan of the 'late' Bob Dylan.  I've written about it before back in 2007 when I said that we were living in the "Golden Age" of Bob Dylan.  I still think that.

Ever since the late nineties 'Time out of Mind' I've been really interested in and listening to a lot of his new-er music.  In fact...a lot of this recent music (Time out of Mind, Love and Theft, Modern Times and even Tempest) has given me a chance to look at other records of his that I have missed.

There's a song that kicks off the album - Beyond Here Lies Nothin' - that I've heard before and have some familiarity with...but the rest of the record?  Nothin'.  As in...I had never heard any of it.

But that changed a week ago.  I've been listening to it on my commute a bit the past week and the real standout for me is 'If You Ever Go To Houston'.  Give it a listen.  A couple of times.  Really puts you in a good place.

Check it out with this weird ripped YouTube version: