Wall Calendars Turned Over To May 2015 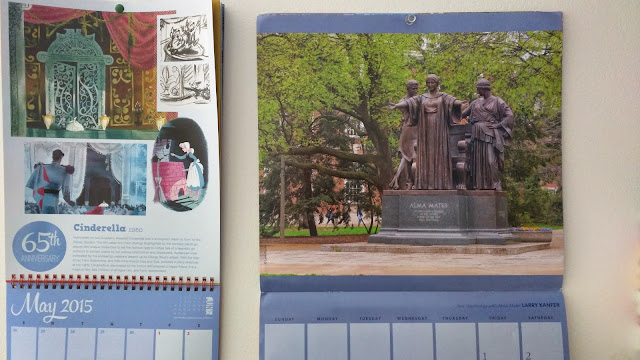 I took this photo late last week in my office at Aon, so it wasn't the 12th of May but more like the 7th of May that I actually realized I had to turn them over a month.

But, back to this month's images:  on the left in the D23 calendar you see the 65th Anniversary of the release of Cinderella in 1960 (and...if you are like me - and Nat - and are a HUGE Disney nerd who listens to Disney Podcasts, you'll know that the success of this movie and the cash it threw off to the company was the biggest driver of the creation of Disneyland!).  On the right, you see a photo of the recently renovated Alma Mater right on Wright/Green Streets.  With Graduation right here, it is a totally appropriate image.

"To thy happy children of the future, those of the past, send greetings."