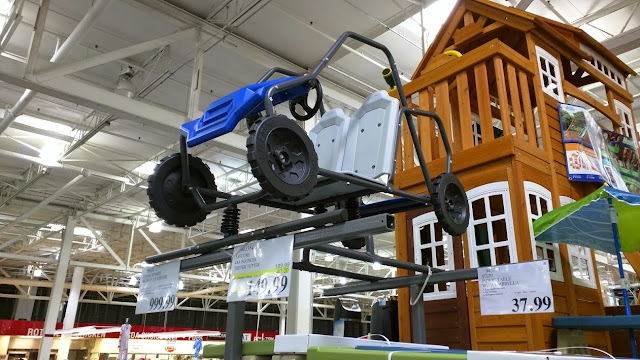 I've spent a bit of time covering the Costco Cedar Summit playground sets and the Costco Suncast playground set in the past here on the blog.  They're chronically at the top of the 'most read posts' almost every week.  They rank well in search and because there's such limited information on the Costco site about the sets, it seems that parents and potential buyers go online and seek out some answers.  They end up here.

But, this year, Costco has a new product.  Or...at least...new to me.  It is there pictured above right in front of this year's edition of the Cedar Summit playground set.  It is a "Lifetime 4X4 Bouncer Teeter Totter".  It is priced at $189.99 with a $40.00 instant rebate at our Costco in Oak Brook, Illinois.  On the Costco site, they list a different Lifetime bouncer - an airplane one.  That one has really strong reviews, so it seems these things are built well.

This one is a two seater, so at least two kids could get a lot of fun out of this at one time.  We have bought a Lifetime outdoor product before from Costco and it performed well.  That was a Compost Tumbler (I posted about it back in 2010).  It is still going strong and as recently as March of this year paid off with some 'black gold'.

We're not quite settled in our place as we are in a 'will they/won't they' in terms of what the future holds, so we didn't pick one of these up.  But, if you did, what do you think?  Worth the $150?
2015 resolution costco everygoddamdamnday playground