Posted by Jake Parrillo on June 21, 2015
A few weeks back, we went to check out the models at the Nitti Development in Elmhurst on the property of the old Elmhurst Hospital site.  It is just a few blocks away from us and we were more than curious.

There's been some criticism of folks about the development, but I think most of that is a case of the sour grapes.  When you go into the models, there's A TON to like.  The folks at Nitti have done a nice job of building quality homes and finished them really well with decorator-level touches all over.  The only downside it seems is that your house - while it will be REALLY nice - will look and feel just like all of your neighbors.  That's not common in Elmhurst, but it certainly is common in further out suburbs where entire new subdivisions spring up.

We went into two of the models we both really liked the layout and floorplan of them.  One thing that stuck out was the upstairs layout.  Here's a photo of it.  Check out the circled part in red: 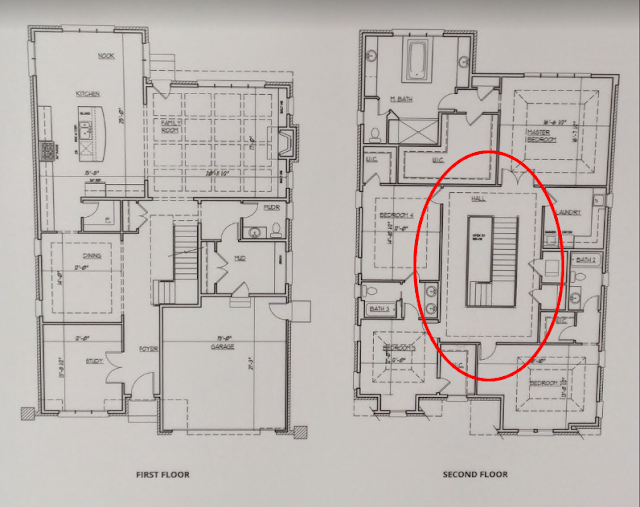 This part - with a hallway ALL THE WAY AROUND the staircase with just railings *felt* really nice.  It gave the upstairs a really airy feeling and at the same time felt 'fun' in that I could picture the kids running around up there.

But...the one thing that kept creeping into my head was that while it *felt* really nice, was it a good use of space?  Couldn't they have made (at least some of) the bedrooms up there bigger by sucking that space into the rooms, re-positioning the doors?  Of course they could, but I have a feeling that this was much more a design/aesthetic choice by the architect and builder.  Form trumped function.

And because the house is like 3800 square feet and the bedrooms are already ample-sized, it seems that this little design flourish was worth the space sacrifice.  Would you do this in your house?
2015 resolution construction elmhurst everygoddamdamnday floor plans home