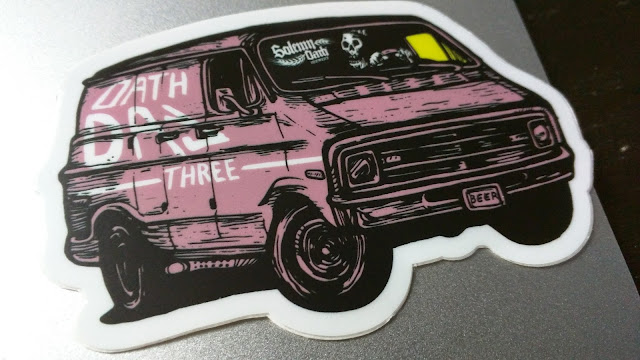 Back in May, Nat and I joined some of our closest friends (and family!) at Solemn Oath Brewery's "2015 Oath Day" - which was a celebration for their third anniversary.    We had a great time with some good beer (and one bad one!  One of the 'tea' ones was terrible!), lots of laughs and a new appreciation for what it takes to grow a brewery from scratch to a major regional player.


There’s no need to dress up, but Oath Day 2015 will rock a not-so-subtle ’80s vibe. Again we’ll be skipping out on long lines and obnoxious crowds in favor of closing down for the day and opening up as much of our entire facility as we can, including a massive chunk of the parking lot and brewery. Oath Day is Saturday, May 16th, and here are the details. Again this year we’ll have two sessions and there will be even more room to spread your wings. We’ll have more pouring stations, more activities, more coffee beers, more wood-aged beers, more collaborators, more SOBs, and more time.

Solemn Oath was started back in 2012 and is headquartered in Naperville, Illinois.  They have both a brewing facility and a small taproom on the site.  If you're out on Ogden Avenue in Naperville and have an hour to burn while your wife looks over the stuff at the Land of Nod Outlet store, you should stop by for a beer.  It is super close.  Seriously.  Super close.

It seems it is easier today to 'root' for a small business and there are plenty of success stories in your hometown/on your mainstreet to choose from these days.  But, after getting to know one of the founders of Solemn Oath over the past few years, I can tell you that this place is something worth watching and genuinely *somebody* to root for.
2015 resolution beer everygoddamdamnday solemn oath