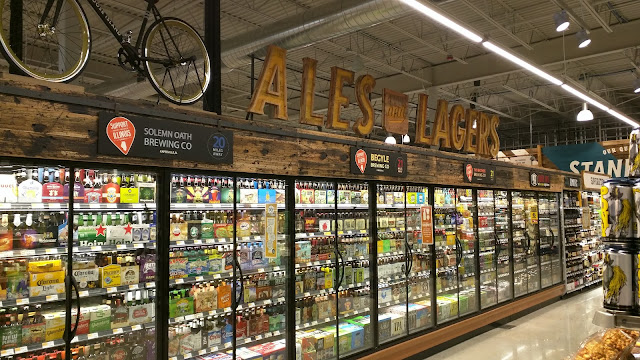 I wrote about how we attended Solemn Oath's "Oath Day Three" earlier this month here on the blog, but I had another 'encounter' with the brand this weekend when Nat and I went to the new Whole Foods out on Route 83.  Nat has been there a few times, but it was my first time.  (More on that later)

While she was poking around the bakery section, I was drawn to the "Ales and Lagers" section of the beer cooler - as one is naturally - and spotted this sign for Solemn Oath Brewing Company above the cooler.  Have to give Whole Foods credit:  they're really into promoting hyperlocal offerings and they go above and beyond to call some vendors out.  One of those is the guys at Solemn Oath - where they note the brewery is a mere 20 miles away.  Pretty neat to see them get some promotion.

If you haven't checked it out already, go back and read the post about Oath Day Three.
2015 resolution elmhurst everygoddamdamnday local solemn oath whole foods