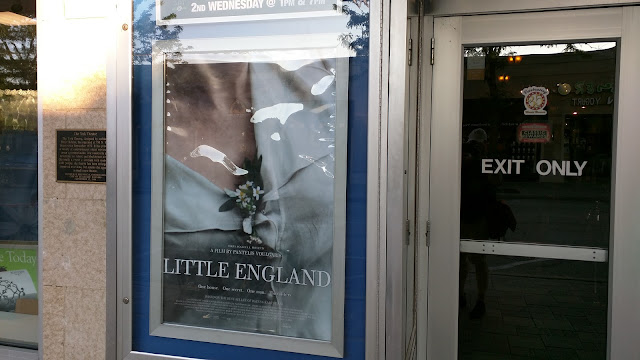 Back in June, I posted about the new "Art @ The York" film series at the York Theatre in the Elmhurst City Center.  Their first film was the Bansky movie "Exit through the Gift Shop".

Walking by the theatre on my way to the train this am, I noticed they're advertising the next in the film series:  Little England.

From the York Theatre's site comes this synopsis of the movie:


One home, one secret, one man, two sisters. The 20 year old Orsa is madly in love with the lieutenant Spyros Maltabes. As a closed character she won't reveal her secret to anyone. Her little sister, Moscha, dynamic and full of dreams wants to leave Andros, to escape the fate of the women of the island that marry sailors that are always away or drown at the sea. For their mother, Mina, wife of a captain who prefers the Atlantic Souf than his home, love means only big trouble and pain. Leaving aside the feelings of her daughters, she conspires, uses acquaintances, and marries them with men according to interest. Orsa with marine and captain Nikos and later Moscha with now captain Spyros. Their house is divided into two. Down lives Orsa, up lives Moscha.

Now...that may not sound right up your alley, right?  But...even if you're not much for art films, let's do our best to support Classic Cinemas and the York for trying to bring some unique programming to our community.  If you can't get to the showing yourself, talk to your friends and neighbors. Help fill the seats so we keep getting more of 'this stuff' in Elmhurst.  We don't want to be a bunch of squares, right?
2015 resolution art art @ York city of elmhurst downtown elmhurst elmhurst city center Elmhurst City Centre everygoddamdamnday movies york theatre