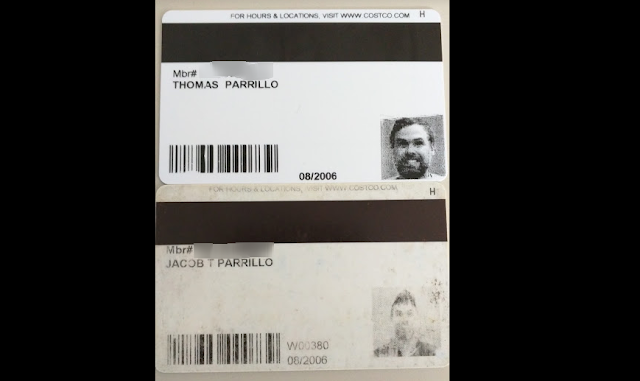 I've written about my experience with Google Express before here on the blog.  I really like it.  Especially for Costco purchases.  For example, we were having a first birthday party for The Beef over this past weekend at our* house and after doing a proper inventory, we discovered that we were covered with disposable plates and forks/knives/spoons, we didn't have any of those big party dinner napkins.  You know...this kind.  So...I added those to my cart and threw in a big party container of cashews and I hit the $15 minimum order for free delivery.

12 hours later....they arrived and we were ready for the party.

But...to get started with buying on Costco via Google Express wasn't super easy.  It required a visit to our local Costco store and a request of a new Costco card.  That's because....Google Express requires that the name on your credit card that you are using to purchase stuff match EXACTLY the name on your Costco account.

The card on the bottom?  That's the one from 2006.  (Member since 2006, baby!)  And for some reason, my name on the account was listed as Jacob T Parrillo.  I won't go into how wrong that is, but it never really mattered because the card got me into Costco and I could buy whatever I wanted.

But, Google Express wouldn't let me buy.  Until I changed the name on my account.

Getting a new card, with new photo that isn't super dingy was just a nice side benefit, I guess.

*Our meaning my sister and Equation Boy/Man's house where we are temporarily living thanks to them!
2015 resolution costco everygoddamdamnday google google express the king of the ball tossers