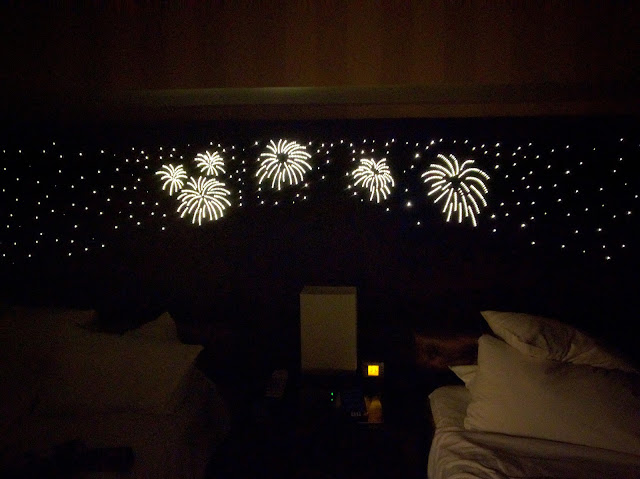 Sure...the phone and internet guide featuring Walt is cool, but you know what is REALLY cool about the Disneyland Hotel?  The headboards.  Yeah...the headboards.

That photo above is what they look like when you've turned off all the lights in the room but keep the headboard light up.  When you push a button, there's a music box sound of the song 'When you wish upon a star' and the fireworks flicker a bit.

Here's a video on YouTube of it happening on someone's visit.

This was a total delight for not just my kids but also for Nat and I.  I can't tell you now many times I hit the button to make the song go on and have the board light up.  This is just another one of those little touches that make strong memories for me at Disney.

But...it also speaks to the details they've put into the Disneyland Hotel rooms.

We listen to Pete Werner and the gang on the Dis Unplugged and Pete just raved about the rooms at the Disneyland Hotel.  After that episode, we were hooked.  We needed to give this place a try.

As I've said before...if you're going to the original park that Walt built:  sack up and stay at the Disneyland Hotel.  It is worth the few extra bucks.
2016 resolution disney Disneyland fireworks hotels Mickey Mouse trips vacation