The McCallister House in Winnetka 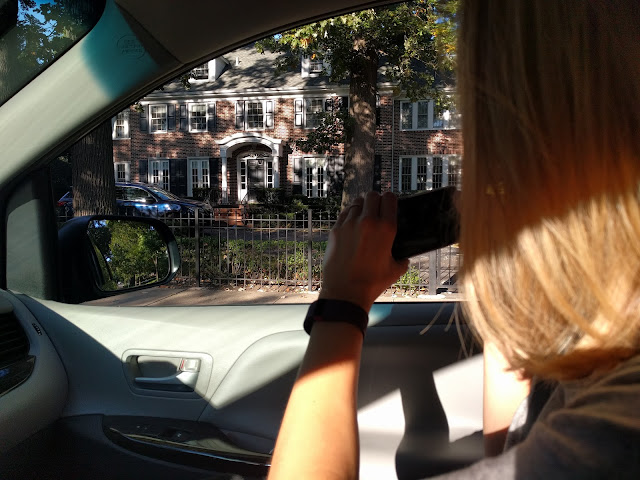 On Monday, I posted about our trip to the Highwood Pumpkin Festival where we carved a few pumpkins and rode some rides.  And, I mentioned that we made a second stop on the way home.  And, this photo above is *that* second stop.  And it is kind of a 'meta' photo.  That's me, in the driver's seat of the van taking a picture of Nat taking a picture of the McAllister home from Home Alone in Winnetka.

Yep...that's the driveway where the neighbor tells the McAllisters to "Bring me back something French!" and is the one that has been subject to a bunch of coverage lately as it has been put up for sale and ultimately changed hands a few years back.

We were in the neighborhood, or....well...we kind of *made* it the neighborhood.  As we left Highwood, Nat navigated us down there to check it out.  We've been meaning to go up there for a while, but we haven't been close enough.

The place is a stunner.  But the real star of the show is Old Man Marley's place next door.  Turns out, it, too, was up for sale a few years back.  For a mere $3.1M, it could have been yours.

The new owners have put up a big fence and gates on the horseshoe driveway as I'm guessing they get a lot of lookie-loos like us.

We'd love to get back during the holidays to see if they decorate the place.  And let's be honest:  if they bought this house and don't decorate it for Christmas, that's a crime, right?
2016 resolution christmas famous houses home alone houses from movies natalie north shore winnetka