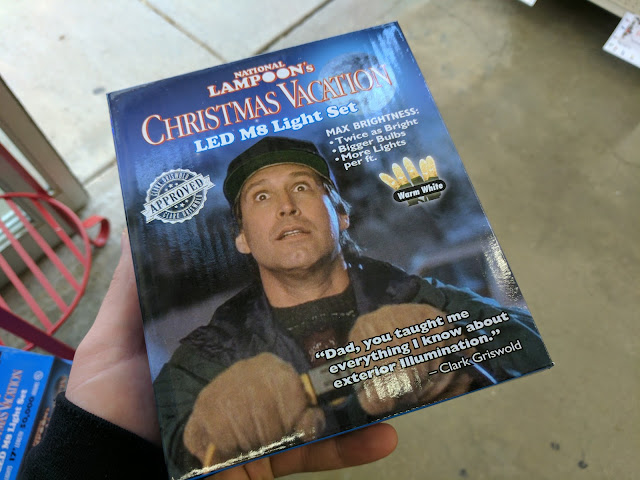 We were at Wannamakers in Downers Grove for their Christmas open house over the weekend and while the rest of the crew was waiting in line to see the Big Guy, I took the Bird and the King of the Ball Tossers into the store to wander around the Christmas lights department.  And that's where I came across these National Lampoon's Christmas Vacation LED light sets.

If you look at the box, you'll see that they bill them as being 'twice as bright' and have bigger/brighter/more bulbs than normal strands of lights.

Kind of interesting licensing at play here and I suppose it is a cute concept, but I wonder if anyone is actually buying these things?  They're more money than comparable sets and it seems like there's very little bragging rights in these once they're out of the box, right?

As for the brightness, I think there's some upside there.  We've put big C9 LEDs on our annual Elmhurst Front Yard Christmas tree every year and I always notice that they're not very bright.  So much so, that last year, I spruced them up with another set of traditional C9's to brighten up the tree.

There's also a net version that you can see below.  While I don't have much interest (nor would Nat ever let it happen!) to transform my house into the Griswold's house covered in lights, I just found out that there's a Department 56 building that is the Griswold's Holiday House.  It is super expensive on Amazon, but I have a feeling that Mantleburg would find a way to annex the Griswold place if it came up for a vote.  Maybe next year?  (also...there's a little set of Margo and Todd in their silver suits?!?!) 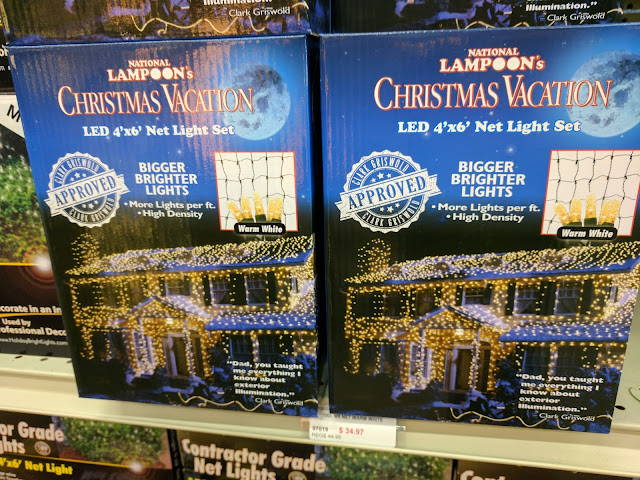