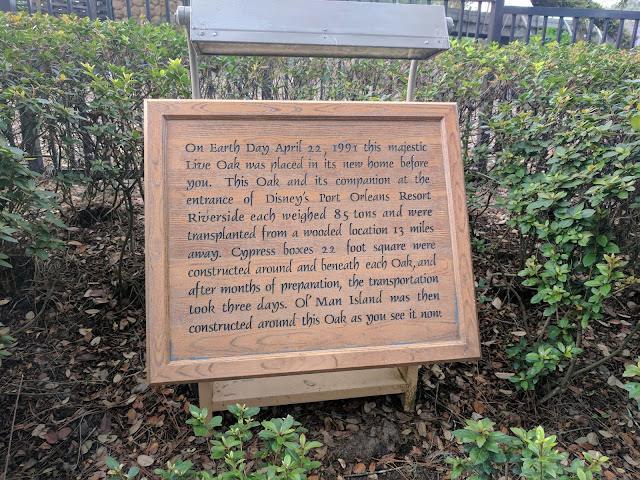 Ever since our first trip down to Charleston, Natalie and I have been beyond fascinated by the Live Oak species of trees.  We doubled down on Live Oaks during our visits to Sea Island over the years.  And we've been dreaming of the day when we could plant a Live Oak on our property.  (Alas, it doesn't appear that they'd survive our climate as they are marked for Hardiness Zones 7-10.  And for sure, we wouldn't get the Spanish Moss on them which add to the dreamy effect!)

Everytime we go on a tour or stay at a place that notes their Live Oaks, we perk up and pay attention.  And Disney is no different.  Out at Port Orleans Riverside, you can find a few of them including this one out on Ol' Man Island behind the pool.  There's the sign above that reads:

On Earth Day April 22, 1991, this majestic Live Oak was placed in its new home before you.  This Oak and its companion at the entrance of Disney's Port Orleans Resort Riverside each weighed 85 tons and were transplanted from a wooded location 13 miles away.  Cypress boxes 22 foot square were constructed around and beneath each Oak, and after months of preparation, the transportation took three days.  Ol' Man Island was then constructed around this Oak as you see it now.

Take a look at this beauty.  You can see a few knobs on the trunk where they've cut off some of the branches - which I'm thinking were some of the more horizontal-growth ones - but you can still appreciate the majesty of this thing. 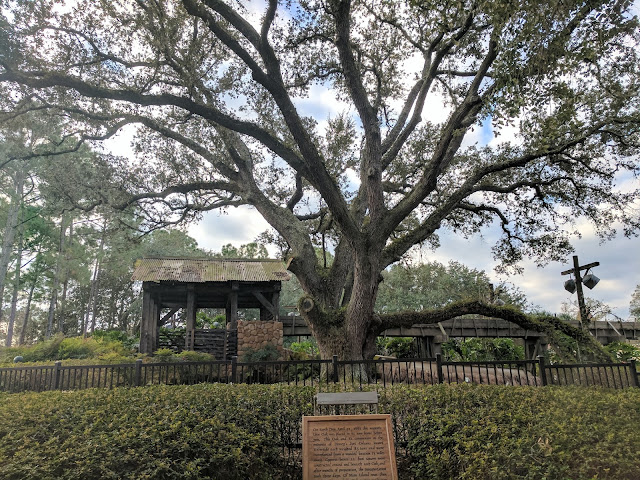 There are people posting on various tree forums about how they've planted one of these in the northern climates and it seems that someone has (at least at one point) been successful.