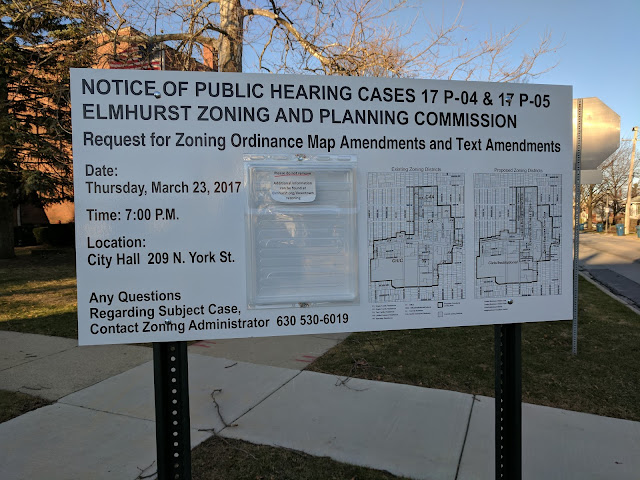 I've covered the Elmhurst City Centre and the commercial developments and activities that take place down there on the blog for seven years.  You can see all the 'Elmhurst City Center' posts here.  There's a lot of them.

But, there's big changes on the horizon for the downtown area.  If you live in any of the areas that are bordering the City Centre areas, you've probably noticed the sign you see above posted on various corners around town.

The reason is that the City is going through a process to adopt a new Downtown Plan.  That plan sets forth some zoning changes that would amend the current zoning ordinance.  Full details can be found here on the City of Elmhurst's site.

The City of Elmhurst should be commended for transparency and their efforts to engage the public on this.  In addition to these signs, they've also utilized a digital sign right on York.  I mean...they're really trying!  So, good work, City of Elmhurst.

We happen to live pretty close to some of the proposed changes.  And as such, we received notification from the City of Elmhurst inviting us to a hearing on March 23rd at 7 pm.  Here's the letter than arrived last week: 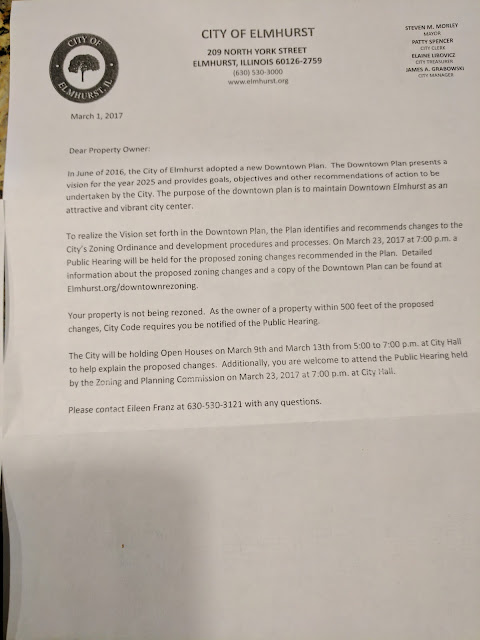 Note the line that says:  Your property is not being rezoned.

Also included with the letter were two maps.  First one shows the current or existing zoning map: 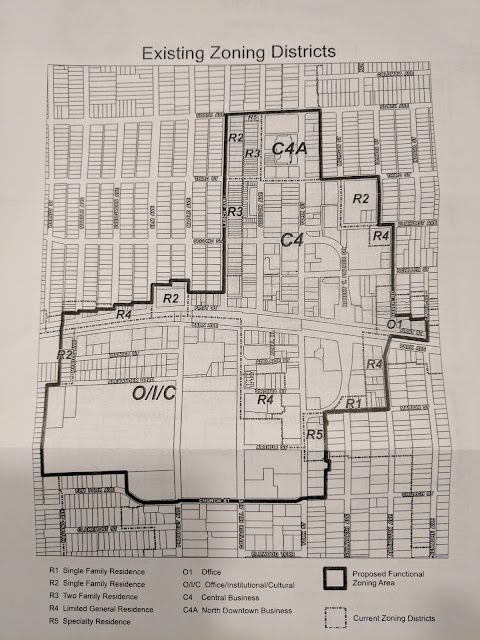 And the new proposed zoning districts that you see below.  The big changes include the re-organization of the zoning types to include:

The biggest change, at least by my eye, is to the northwest portion of the City Centre footprint to include the rezoning of areas that are currently zoned R-2 (single family residential) and R-4 (limited General Residence) to Central Business Outer Core.

Those two spots that are impacted are the footprint of the Immanuel Lutheran Church and School and the apartment building on Elmhurst and Haven.

Other changes include the area West of York and North of the tracks we see a change from R-2 and R-3 (multifamily residential) to something called "Neighborhood Transition".

And finally along the tracks, the far reach of this map to the west also shows a change from R-2 and R-4 to the same "Neighborhood Transition: 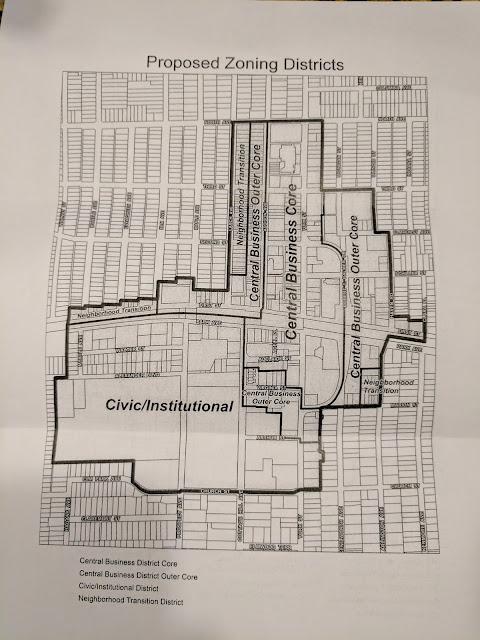 Those "Neighborhood Transition" areas are important, so let's call them out: 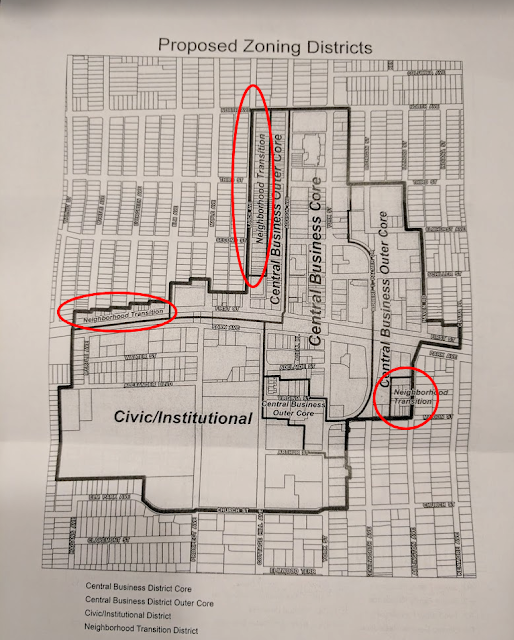 Each of those areas are places where the City Centre's business core is 'transitioning' into neighborhoods.  That means, the uses are a little bit higher density, but are all residential.  Think Townhomes.  And that's what they City of Elmhurst has been approving in those areas recently. So that's a perfect fit.

But look at the top right?  There's NO "Neighborhood Transition" up there.  That means - if the current proposed zoning changes are approved - that in these two areas I've outlined below, the City can move forward with commercial development that is up to four stories tall.  And can include things like Banks, Brewpubs, currency exchanges as well as a municipal garage.  Or...even worse, a pawn shop.  Yep..we have those in Elmhurst.

So, what should be done?  Just look at these two circles: 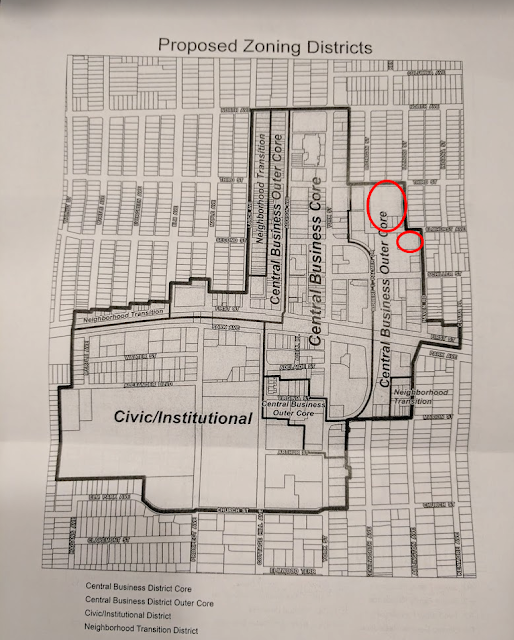 Isn't the answer clear?  Of course, the NIMBY folks (like me!) would want that to remain single-family home zoning.  But, that may not be in the best interest of the entire City of Elmhurst and for the viability of the Elmhurst City Centre.

"Neighborhood Transition".  Townhouses.  Residential, but with higher density to support the City Centre.

Look at the rest of the map and think about the places where this *new* City Center bumps into homes in a neighborhood.  Everywhere else, we've leaned on this 'Neighborhood Transition'.  Except in the northwest corner.  I think it deserves another look and the solution - to me - seems to be the compromise on re-zoning these areas to "Neighborhood Transition".

Will Immanuel Lutheran move out?  I'm not sure.  But providing them a commercial zoning designation surely will give them options.