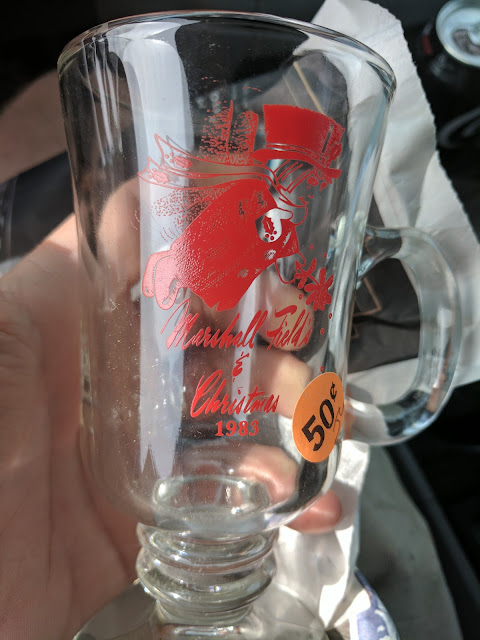 But, in 1983, they used Uncle Mistletoe.   Don't know who he is?  Check out this piece about Field's from the Smithsonian.  It talks about how the window decorating thing naturally lead to store-specific characters being created.  Marshall Field's had Uncle Mistletoe:


Soon a new holiday window trend took hold: store-specific mascots. Montgomery Ward’s claimed Rudolph the Red-Nosed Reindeer and Wieboldt’s concocted the Cinnamon Bear. Not to be outdone, one of Moss’s co-designers, Joanna Osborn, conjured Uncle Mistletoe, a plump, Dickens-like figure decked out in a red great-coat and black top hat. With white wings, he flew around the world, teaching children the importance of kindness at Christmas.

The first window displays of Uncle Mistletoe went up in 1946 in a series titled A Christmas Dream, which featured the generous old man bringing a young boy and girl to the North Pole to visit Santa. In 1948, Uncle Mistletoe got some company in the form of Aunt Holly , and the pair became a merchandizing bonanza. Over the years, shoppers could buy dolls, books, ornaments, coloring sets, molded candles, cocktail napkins, hot pads, puppets, glassware, and even used window props.

Lots of things change and there's plenty of belly-aching about Marshall Field's and Macy's (most of it rightfully so), but it seems based on these mugs from the early 1980's, the Field's team was already walking away on occasion from Uncle Mistletoe.  At some point, maybe I'll go on eBay and research the full history of the mugs, but my guess is that Uncle Mistletoe disappeared for a while.

But, what is interesting to me about Macy's is that they started, in small ways, to bring him back.  We go to the Walnut Room every year and this year Nat spotted a display that was set up on the 7th floor to celebrate the history of Christmas at Marshall Field's.  In the case?  Uncle Mistletoe.

I grew up with my mom having an Uncle Mistletoe cookie jar on the counter during the holidays (wonder if she still has it???) and love when I see him pop up from time-to-time.

As for getting back to this mug:  we're living in Vic's house right now, so when I brought them home, I stuck one of them up in her corner cabinet - where the other two were - and when they get back, she'll have a nice few additions to her vintage collection.
chicago christmas garage sale garage sale finds glasses Marshall Fields Mugs uncle mistletoe vintage vintage christmas vintage glasses Walnut Room