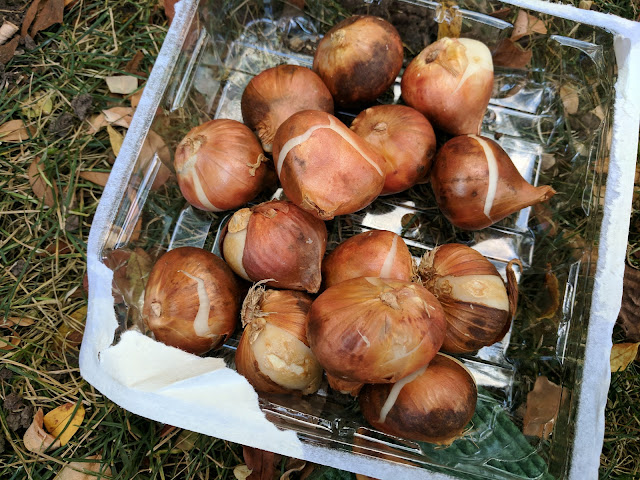 A few days ago, I posted some photos of a handful of Purple Sensation Allium bulbs that we did a fall bulb planting with around one of the big oak trees in our #newoldbackyard.  Photos here.  I mentioned that we also planted some tulips on that same day.   Today's post shows off the bulbs of the two varieties that we put down.

I picked up 2 15 packs of tulip bulbs at Menards that were on sale (they also had the 11% rebate thing going on...which....seems right now to be an almost constant thing??).  The first set was 15 Darwin Hybrid Tulips in orange.  You can see the packaging below: 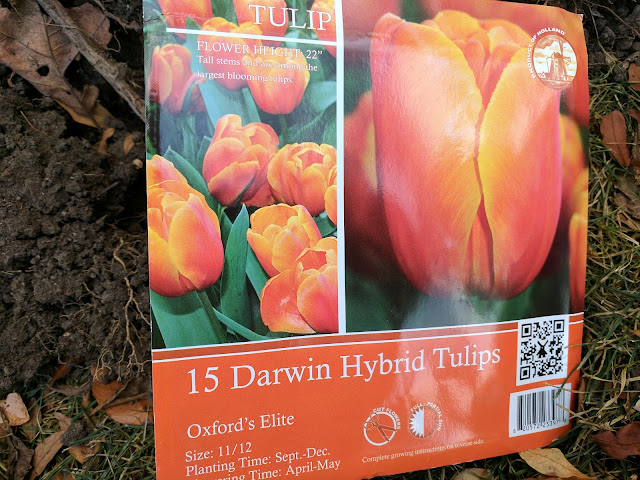 According to Longfield Gardens, Darwin Tulips have some special characteristics:


Darwin hybrids produce big, showy flowers with a classic tulip shape: broad at the base and slightly narrower at the top. They come in a rainbow of rich, saturated colors that range from white through yellow, orange, red and pink, including several lovely bi-colors.

Darwin hybrids are reliable performers that aren’t bothered by cold winters or changeable spring weather. Their blossoms are heat tolerant and they grow well in partial shade as well as full sun.

But they also had this passage:

Darwin hybrid tulips are sometimes called “perennial tulips”, because after putting on a great show the first year, they will usually give you another year or two of good-size flowers. If you want to encourage your tulips to bloom for more than one year, choose a planting location in full sun and make sure the soil is well drained so the bulbs will be as dry as possible during the summer months.

A little bit of research turns up this passage from American Meadows:


The tulip as duly noted in horticultural texts is a perennial flower. This means that a tulip should be expected to return and bloom year after year. But for all intents and purposes this isn't always the case. Most tulip-lovers content themselves with treating it as an annual, re-planting again each fall.

But if tulips are perennial, then why don't they always behave as perennials? The answer to this pressing horticultural puzzle is surprisingly simple.

"Tulips are indeed true perennials," explains Frans Roozen, technical director of the International Flower Bulb Center in Hillegom, the Netherlands. "Getting them to bloom in your garden year after year is no problem, if your garden happens to be located in the foothills of the Himalayas, or the steppes of eastern Turkey."

According to Roozen, the tulip - an oriental native first introduced to the western world some 400 years ago - is at its perennial best in conditions that match the cold winters and hot, dry summers of its native regions.

Alright...so my experience is that I could usually get tulips to come back in the Spring, but now that I'm thinking about it, I don't know if we ever had 3 seasons of growth to watch/note.  Meaning...I know we planted tulips at our old house in Elmhurst and they *for sure* came back at least two years.  But...we might have moved out before I could experience this let down of them not coming back in year 3?  Or...could the Chicago Suburbs have a climate that is like the 'foothills of the Himalayas'?!?  I mean...we do get cold winters. And dry summers, right?

Also, just looking back here on the blog, at Equation Boy/Man's house, they had some tulips out front that I documented for a few years.  Here's a photo of their tulips coming up this Spring.  And here's the same bulbs emerging in 2016.  I'm guessing my sister put those in long before they left town for Switzerland, right?  So they had more than 2 seasons of coming back?

Now I'm wondering about my own tulips?  At least I'll have this post in the garden diary to refer back to in the coming years, right?

Alright...back to the other set of tulip bulbs that we planted.  ("We" being me and the KotBT.)

These were yellow Triumph Tulips. 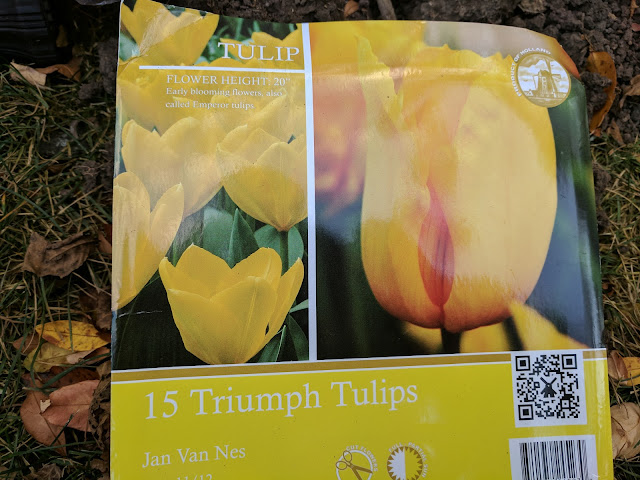 According to John Scheepers, these Triumph Tulips are a bit different from the Darwin variety.  They are a cross-breed:


This cross between Darwin and Early Tulips sports strong stems and large, shapely blooms which are as equally successful in the garden as in the greenhouse. Blooming in late April, Triumph Tulips are somewhat daintier than Darwin Hybrids with exquisite pastel-colored sheens.

We ended up mixing the bulbs in together in a few different areas along the south fence line.    The instructions said to plant them 6" apart, but I was tired and perhaps lazy.  So, ours ended up closer together.  Here are some of the bulbs before we covered them up with soil.  The dirt here is dry and crumbly.  Not awesome earth like we had at our old house in Elmhurst.  So, after digging these up, I amended the dirt with some higher-end potting soil with perlite to help these bulbs manage their time in the ground. 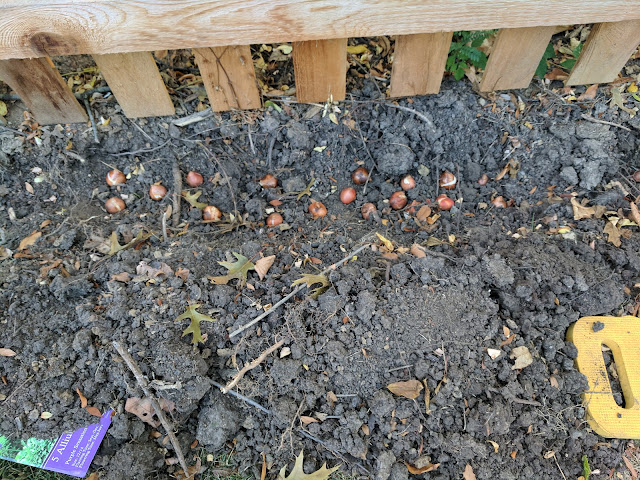 And...here for Spring reference is a photo below of the spot where these bulbs are lying dormant for a long winter's nap.  They are along the south fence line, just west of the espalier'd (or pleached, if you like!) Greenspire Linden Trees. 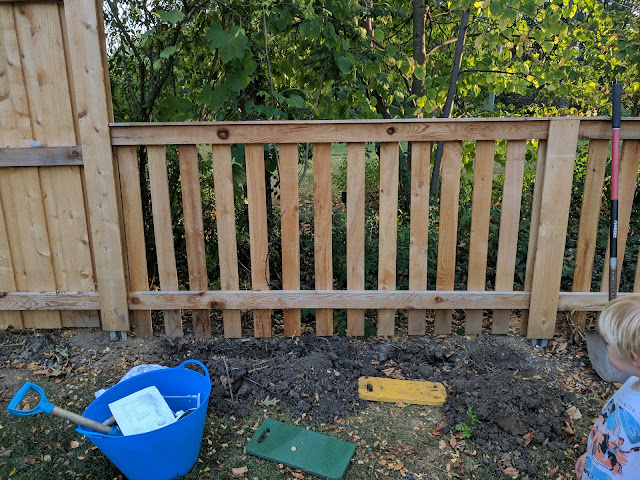