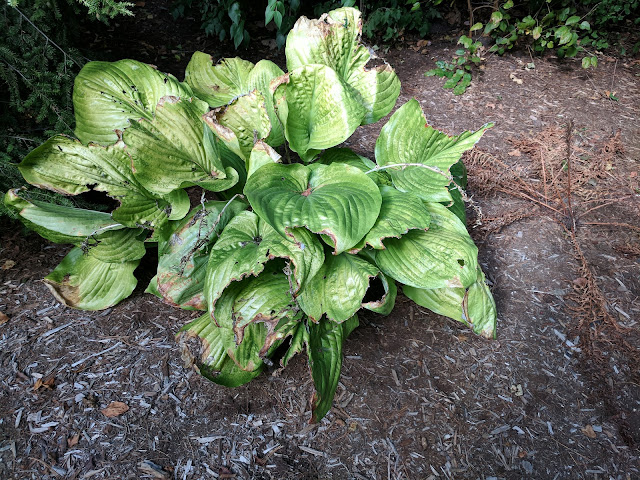 For the first time in a while, we spent an afternoon out in Naperville with Nat's parents.  And that means that I took some time to wander in Nat's Mom's garden where I marveled at the size and span of her hydrangeas but also was able to peek at the plants that she is fostering for us.  Above you see both the giant hosta on the left and the dried out ostrich fern laying on it's side on the right.

The fern ran it's course and dried out.  That is normal.  The hosta is nearing the end of it's season, too, so that's why you're seeing some dried spots.  Critters are the likely cause for some of the missing pieces of leaves.  The last time that I checked in on these plants was early this Spring.  Here's a photo of the hosta emerging from the mulch.  Here's what this hosta plant looks like when it is a bit further out of the ground but not unfurled quite yet.  Love this time of year.  So much to look forward to and so many gardening expectations.

And here's a photo from early summer of 2016 where you can see the full splendor of both of these plants.

According to most things I've read, the best time to transplant hostas and ferns is in the early Spring, so I'm thinking that we'll grab these once they've sprung up and put them in their final destination in our #newoldbackyard.
ferns foster plants Hostas landscape naperville ostrich ferns plants shade gardens
Location: Naperville, IL, USA