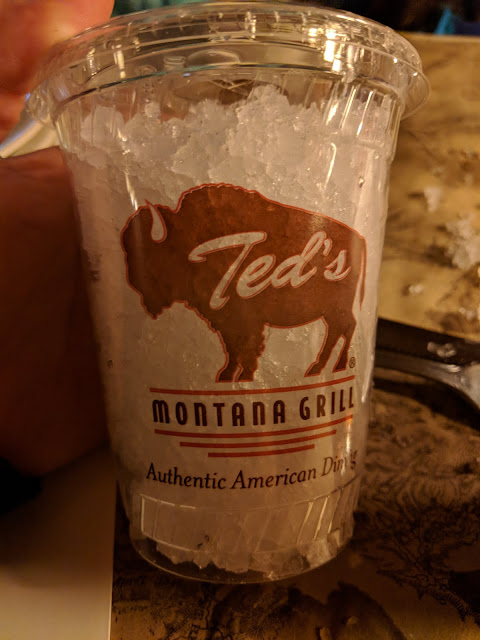 Can we talk for a minute about Ted's?  Ted's Montana Grill.   Have you been?  This place might be my favorite chain restaurant in the world.  We don't go there very often - in fact I bet I've only been to Ted's about 10 times total - but it has quickly risen to the top of the rankings for me.

Here's my love letter to Ted's:

If you haven't been to Ted's Montana Grill, give it a try in your local restaurant rotation.  Sure, when we're going out for burgers we go to the Country House far more than we go to Ted's.  But, when it comes to chain restaurants (Ted's has close to 50 locations by my count, so it qualifies as a chain, right?

Let's start with the crushed ice you serve with your water, sodas and Arnold Palmers.  Crushed ice.  Such a nice touch.  Why don't more restaurants serve crushed ice?  Not sure, but it must have something to do with cost because, frankly, everyone adores crushed ice, right?  In fact, it makes me overlook those paper straws - which I end up swapping out mid-meal because they because limp and gross after being used for a while.  Listen...I can commend Ted's for being animal/environmental-friendly with the straws.  It *is* cute.  Just like Animal Kingdom does - but AK goes one step further - they don't even let you have a plastic lid for your soda.  If it wasn't for the crushed ice, I might not let these paper straws slide.

But there's more to love about Ted's.  That includes the half-sours that they bring to your table.  We always get a big heaping bowl of them, but between the kids and I, we destroy it in short order.  Then we get a second bowl and I eat so many that my belly starts hurting.

We dine out most of the time with our kids.  At most places, they get a crummy piece of paper to color and some ratty crayons.  Ted's?  They get Wikkistix.  Those things buy us like 20 minutes while the kids noodle with them.  That's just good parenting there, folks.  And good restaurant service, too!

Hate?  The Bathroom attendant.  I mean...come on.  The whole setup and the turning on the water knobs for you and giving you the paper towel?  And then the tip setup with the mini KitKats and all the weird colognes? It is just too much.  Please just leave me alone in there.

Love?  Ice in the urinals.  Seriously, it is one of life's great treats.  And Ted's does it.  At least at the Bolingbrook location, they do!  You can poke around on the web to understand why restaurants and bars used to/still ice their urinals, but it sounds like it started back in the day when urinals didn't flush and the melting ice served to kind of cleanse the thing over time.  But for me, there's a time component to it that matters most to me:  if there's ice in there, that means that someone was in there to tend to the bathroom not very long ago.  Ice doesn't last long in there between the natural melting and the aiming and what-have-you.    I can't help but think that ice also encourages some better aiming than I normally see in public restrooms, too.

But then there's that weird powder soap they have in dispensers in there.  It is biodegradable Boraxo. Again...novelty of sorts.  But for me, it is old-fashioned or at least faux-old-fashioned.  So, I fall on the side of liking it.  Ted's does this - and the paper straws - in the name of sustainability.  In fact, they put out a whole sustainability report every year.  That's commendable.  This thing is dense.  Like 20+ page report dense.

Then there's the food.  When I'm not watching what I eat, I go crazy here.  The George's Cadillac Bison Burger is my go-to if you're looking for something to try.  Everything I've ever had there has been great.