Our Black Squirrel Survived The Winter 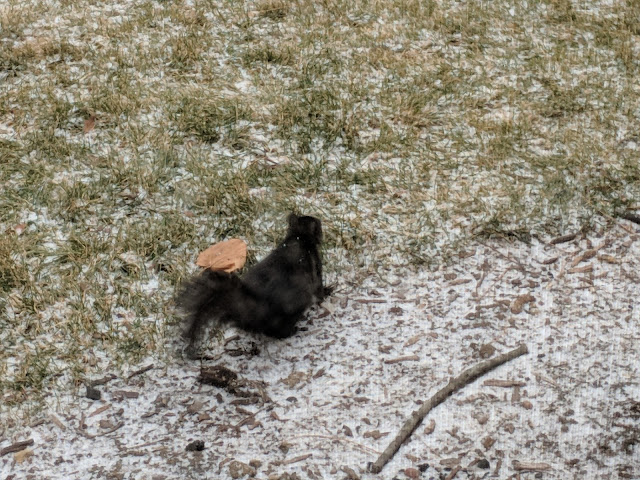 Now...I know that Winter isn't quite done here, but we're already close to the middle of February and my mind is clearly on Spring and planting things, so let's properly caveat this next statement:  Good news!  Our black squirrel survived this winter.

Black Squirrel?  Yeah.  Back in September, I posted some photographic evidence of a Black Squirrel living in our backyard and - at that time - feasting on the walnut and acorn smorgasbord that had fallen from our trees.  I noted at the time that they were rare (1 in 10K).

So, imagine my delight when I was peering at some of our feeders and noticed this guy above lurking on the ground right outside of our kitchen windows.  The Black Squirrel I squealed!?!

And the best part?  He had a partner out there - a Grey Squirrel - that you can see in the photo below for color comparison/contrast.  At first, if you just looked at the photo above Good to see that he's made it through much of the cold and snow.  I've been trying to dole out little morsels to these guys over the winter.  Sure, there's the stuff that falls off the feeders, but I've also tried to put some partially-eaten apples and oranges in the yard.  They seem to disappear, so I'm assuming that the squirrels are gobbling them up.  Maybe it is racoons?  But.. who knows...thanks to all the nutrition they're getting from our feeders and other food stuffs, maybe we'll have even more Black Squirrels running around the yard this Summer.
#newoldbackyard #OnGrandGardens backyard black squirrel new old backyard on grand gardens squirrels wildlife
Location: Downers Grove, IL, USA