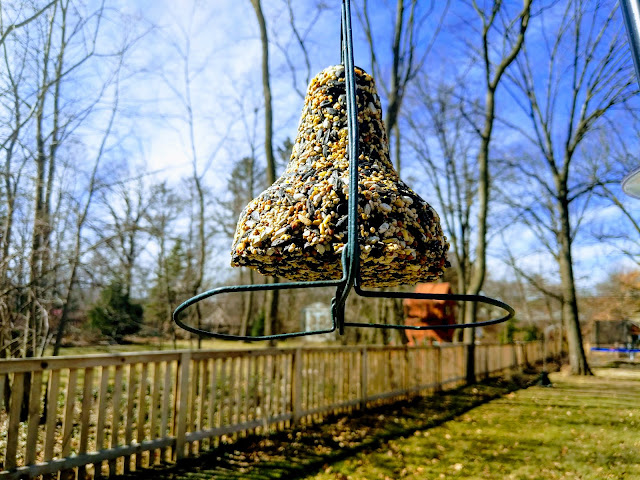 I'm giving the whole bell-shaped bird seed thing a go.  Back in early January, I posted about a "Christmas Bell" that the kids gave me for Christmas that featured fruit and nuts and billed itself as 'no melt', so there was some suet involved, I'd think.  As quickly as I put that seed bell up on on post, it was gone.  Taken by some critter.  Maybe a squirrel, but more likely...a racoon.   At least, that's where my brain is right now having seen a couple of big fatty raccoons in our yard on a couple of occasions lately.

Having come across a seed bell from Kaytee (that you can see below) on sale at Menards, coupled with the fact that I had previously bought the 'seed bell hanger', so I was willing to get right back on the saddle with another one of these. 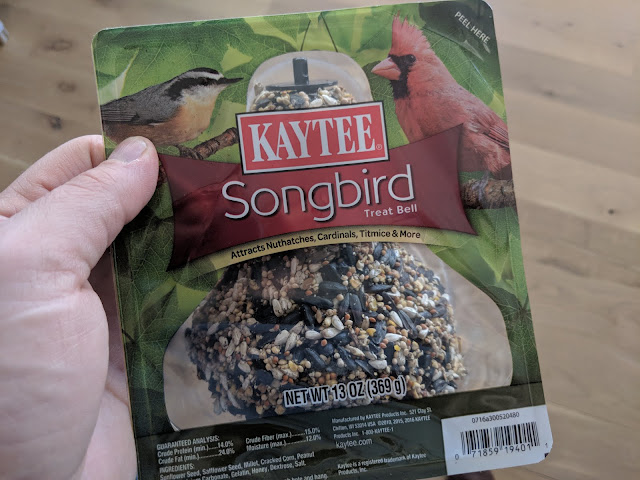 This time, however, I am prepared.  The old one was put up on a pole that had a baffle on 'top' of the bell.  Meaning...I was attempting to keep critters from kind of 'jumping' onto the bell from an adjacent post.  What I didn't realize was that the critters could just scurry right up the post.  This one?  I put it on the other hook of the free-standing pole that my fly-through feeder is on.  Check out the photo in this post.  The baffle, in this case, is *below* the feeders.

As of this posting, it has been about a week and so far - *knocks wood* - the bell is intact.
#newoldbackyard backyard bird bird feeders bird seed birding birds squirrels