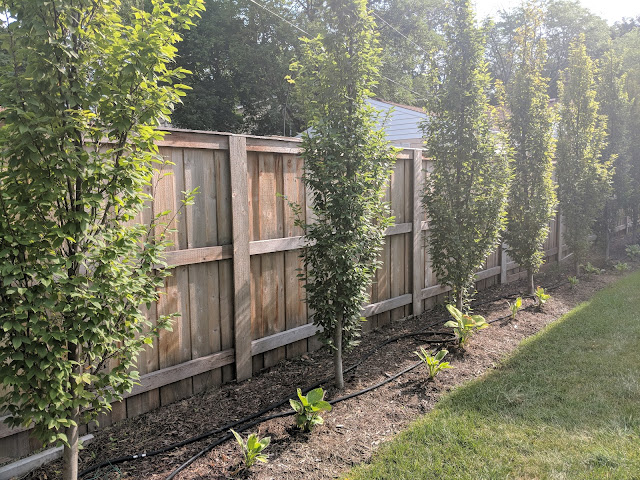 Back in May, we planted seven Frans Fontaine European Hornbeam 2.5" caliper trees along the north fenceline of our property in an area that is right outside of our screened porch.  We selected these trees due to their narrow habit and how they will (eventually) grow into a screen in a narrow area.

Due to the investment in these trees, I've been pretty careful to baby them with water and to try to make sure they establish themselves this season.  Having been planted in May, we have the full Summer to have them put down roots to ensure they come back next Spring.  I've been using a soaker hose and watering them about once or twice per week at about an hour per watering on a low setting.  These were planted down in a low spot, so they're also the benefactor of whatever natural water that occurs on the property as it flows downhill.  On the flipside, they're sitting right on top of a drainage pipe and there's a grate right in the middle of these things that is meant to collect rainwater, so I'm assuming that this area drains super well and doesn't retain much water.  That's made my decision(s) to water these trees kind of difficult.  I can never tell if I'm putting down too much/too little water.

Like all trees, there has been some transplant shock.  But, as far as I can tell, they've mostly weathered that and are now in a position for new growth.

I thought that this Mid-Summer photo update would serve as a reference point for how these trees grow going forward.  Before they finish the season, I'll take a photo from *inside* the screened porch to show the gap as it stands after one season.  Here's the initial view from the screened porch (Scroll all the way down).

You can tell in the photos above and below that they've fully leafed out and after some new growth that arrived in June, they've slowed down a little bit.  Also, you can see how some of the trees in the photos have larger/wider bursts at the top and bottom, but thin middles while others are more traditionally-shaped pears with wider bottoms and thin tops.

We planted them five feet apart with the hope that they'll fill in completely to make a hedge (like this inspiration photo) over the years.  They say that trees go through a three-year cycle of sleep, creep and leap, so this season is year one:  sleep.  Next year, they'll creep up and out.  So by Summer of 2020, they will leap and we'll be closer to a hedge. 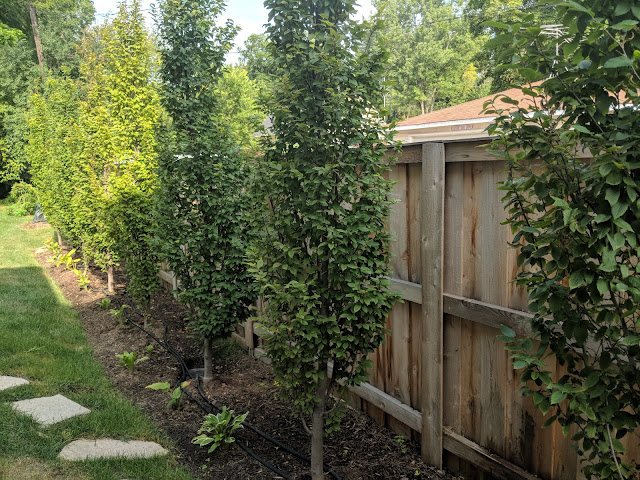