A Bald Cypress At Christmastime - December 2018 (Not my Tree) 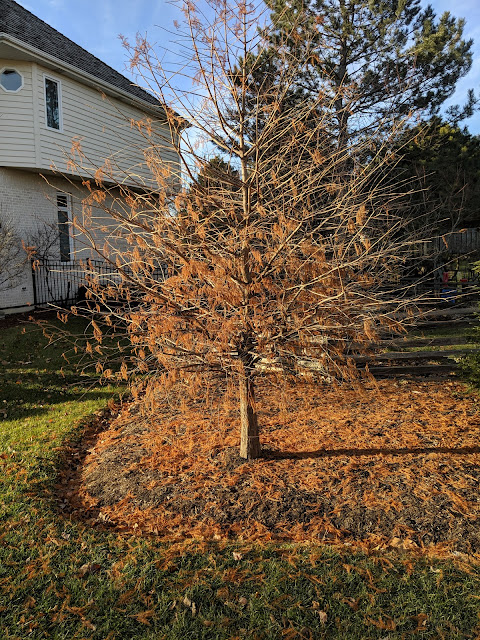 On Christmas Day, we visited Nat's folks house out in Naperville as we do every year.  And, as I do every year, I ended up taking a little walk to get out of the house.  The weather was quite nice, so I wandered around and took in the neighborhood.  I went out one way and then doubled back to end up in the front yard of the house.  (If you know the house and the orientation, this would all make sense.  Those of you who don't, just trust me that it makes sense.)

And out front I noticed that they have a medium-sized Bald Cypress planted near the sideyard that was striking in it's winter beauty.  You can see it above.  Plenty of the needles have dropped.  And all of them have gone orange.  But, plenty of them remain on the limbs.  The reason for posting it here is because our little Bald Cypress - that we planted near our driveway late this Summer - looks similar.

I was concerned that the clinging of the needles to the tree was a bad sign, but based on this species above, I'm now thinking that our little tree is on a good trajectory and appears to have established itself this Fall.  Don't want to get too far ahead of myself, but *fingers crossed* that with the work we put in this Fall coupled with a so-far mild Winter....our little tree is going to survive.
Bald Cypress naperville trees winter