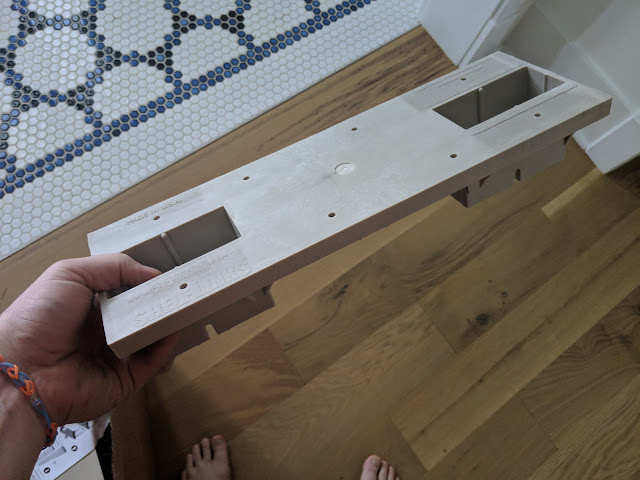 I mentioned back in September that I had come across a product that could make it easy to create storage racks that I wanted to build in custom sizes for our firewood storage.  I then posted a WiP photo of one of the racks with the black brackets and cedar supports.  One of the projects that I'm trying to tackle this Winter is to figure out our basement storage setup.

We currently have a series of different sized/shaped racks holding a wide variety of storage tubs, containers and boxes.  I'm talking about our holiday/seasonal decorations, the Mantleburg Line Christmas Train, tons and tons of kids clothes (that we're holding on to for SOME reason???), our personal effects from childhood (mostly mine) that is totally random and completely un-optimized space-wise.

I mean...the racks we have are set to standard heights.  Meaning they have a vertical set of stands and then come with a certain number of shelves.  So, if our tubs are say 15" tall and the space for each shelf on the racks is 28" tall, we can't get two tubs on them and there's 13" of unused space.

So that had me thinking:  Could I use the shelf brackets that I used for our firewood racks and create some custom-sized shelving both in terms of heights and widths?

Sure enough.  And check out the bracket at the top of this post;  they sell it in a brown, so unlike the black ones I used for our firewood racks, these wouldn't have as much contrast with the lumber.  I also chose to use conventional, construction 2x4 lumber - not cedar.

And here's a look at the prototype rack.  In this space - which is 72" wide from the open door to the pvc pipe coming out of the floor - I had part of a standard rack that held 6 total tubs.  But, it spanned the entire space from the door to the sump pump pit.  This rack takes just a little more than half of the space at 42" wide including all the shelving. 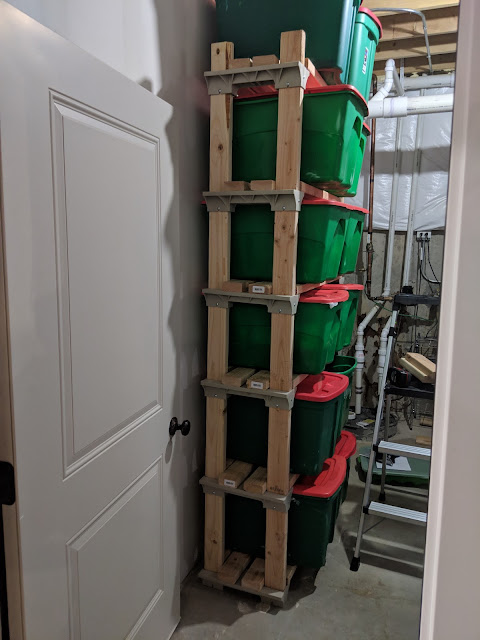 Now?  I've picked all Christmas-colored tubs that are of even size/shape.  And in that half of the space that held six total tubs, I now get 12 tubs of storage. 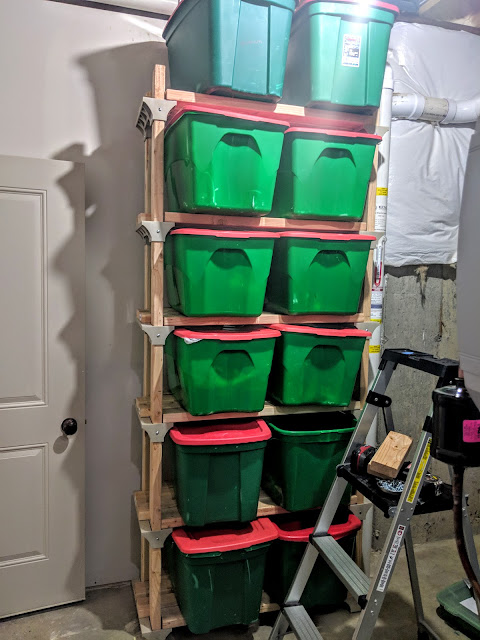 If I'm saying that I could get about three tubs in this same space, the new design allows for a 4x return on space.  I intend to replicate this spacing and racking system three more times in the same storage room.  Two of them will be 60"+ widths that will hold four tubs horizontally and up to five rows high - which nets me an inventory of 40 more 'slots'.  Also, I have space for potentially a 1x rack system next to this prototype that can go five rows high as well.  That's 45 + 12 = 57 'tub slots'.