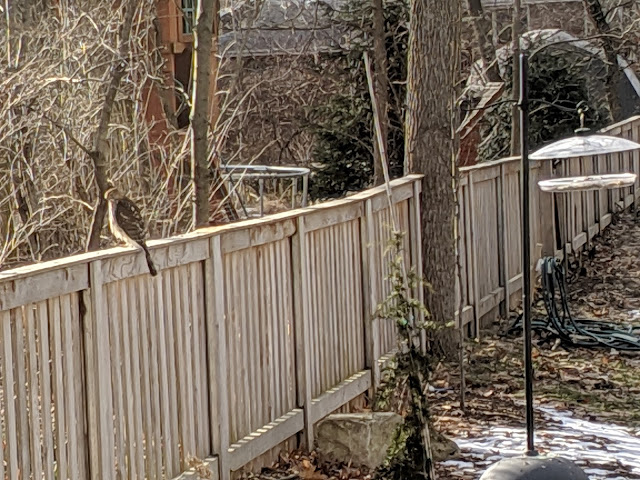 Look who I spotted on our fence?!?  A bird of prey.  See him perched on the top edge?  In the photo above, you can see how close he is to the fly-thru feeder that we see a lot of song birds eating at most mornings.  I'm pretty sure he's a Cooper's Hawk.  But, I'm not too adept at identification of hawks and my phone's zoom only does so much in terms of quality photos.  I was too excited to spot him and wanted to be sure I got a couple of photos of him, so I never got around to grabbing the binoculars and peeping at him closely.

For those keeping track at home, this is the second time I've posted about this kind of bird of prey visiting.  The first time was back in 2012 when I posted about a hawk coming into Nat's parent's backyard in Naperville.  Photo here.

Turns out, identifying this particular hawk is not the easiest as according to the folks at FeederWatch, even more advanced bird identification experts get Cooper's Hawk confused with others.  From FeederWatch:

Sharp-shinned (Accipiter striatus) and Cooper’s (Accipiter cooperii) hawks commonly prey on feeder birds, and they are frequently reported by FeederWatchers. Despite their common occurrence, these hawks present a significant identification problem for many beginning and intermediate (and even more advanced!) birders. There is great variation in plumage and in size for these two species. Therefore, perhaps more than any other similar-looking birds, no single field mark is likely to distinguish one species from the other. Instead, the careful observer must use a combination of field marks and draw from the overall “gestalt” of the hawk for proper identification. No field guide will substitute for plenty of practice in the field.

That part about 'prey on feeder birds' had me a little concerned.  So, I kept poking around and found this page on the Illinois Raptor Center's site where they give this advice:


If a Cooper's Hawk arrives at your feeder, stop bird feeding for a few days and it will move on. Placing bird feeders near shrubs or other cover can also provide protection from predators.

So, that's what I ended up doing.  I brought the fly-thru feeder into the screened porch and *crossed my fingers* that this hawk wasn't going to gobble up any of the cardinals or woodpeckers that come to our feeders every morning.

Below, you'll see another photo of this hawk from a slightly different angle.   After I snapped these photos, I saw him dart off towards our neighbor's property.  Haven't seen him since.  Doesn't mean he isn't around, but haven't seen him and after waiting 48 hours to replace the feeder, I eventually put it back up and the songbirds returned, too. 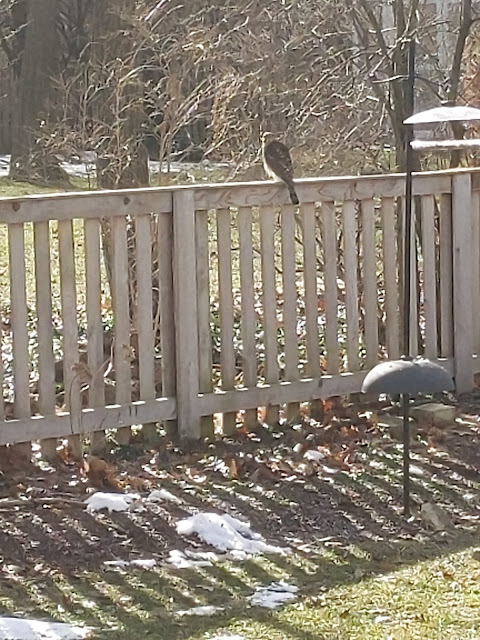