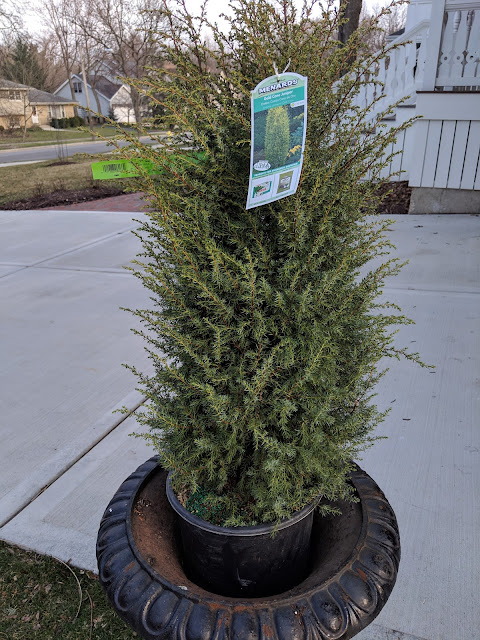 Number Eight on my 2019 To-Do List is to add some conifers to our yard this season and I'm getting an early start on checking the box.  I picked up three of these Gold Cone Junipers that are small sized at Menards this past weekend.  I put one of them in the cast iron pot outside of our garage just to fill the space, but I intend to put them in the ground in the backyard as soon as the soil temperature increases later this month.

The tag below shows these in their Spring, golden spendor.  The back lists the size - which is the big reason I'm drawn to these:  they will get about five feet tall, but stay 1-2' wide.  Columnar.    Or something akin to an 'exclamation point' in the garden.

The big question in my mind is:  are these trees?

Turns out the answer is 'no'.  Can't count them as trees.  They are technically "evergreen coniferous bush".  Can't count them in the number of trees that we've planted - technically.  But should I?  Still considering it.   Either way, I'm counting these towards #8 on our To-Do list of adding more conifers. 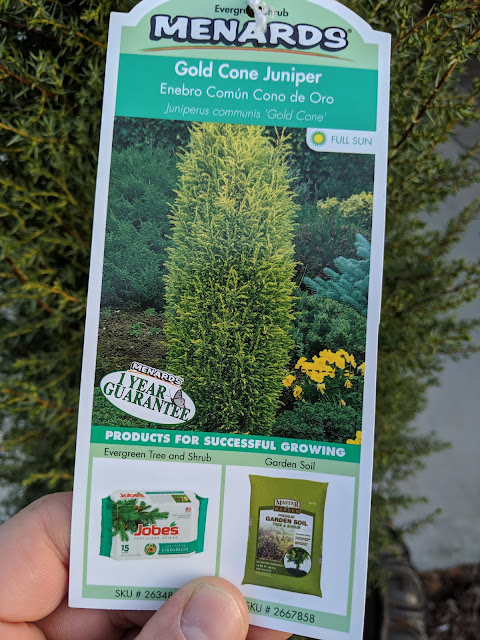 One interesting thing to note is that according to Louis the Plant Geek, one should spiral wire these Junipers to ensure that they don't have their insides shown to the world if snow damage occurs.  Check out this post that shows spiral wire being wound around the plant.  From his post:


The spiral-tie is the way to keep the bush tight enough that the interior isn't exposed. The bush is protected from heavy snowload the moment the spiral-tie is in place. The tie slowly disappears from view: the twine ages to light brown, new growth covers it, and also, because it's spiraling around such a steeply-growing plant, it soon slips downward just a bit, nestling deeper into the current foliage.

I'll take this advice and add it to my 'addendum' to-do list along with relocating of some Fall bulbs.   Also...if you check out Louis the Plant Geek's post, you'll see that his version of this variety appears to be taller than five feet tall?  So, maybe it will shoot up higher than I think?
arboretum conifer trees evergreens garden diary juniper trees to-do list addendum
Location: Downers Grove, IL, USA