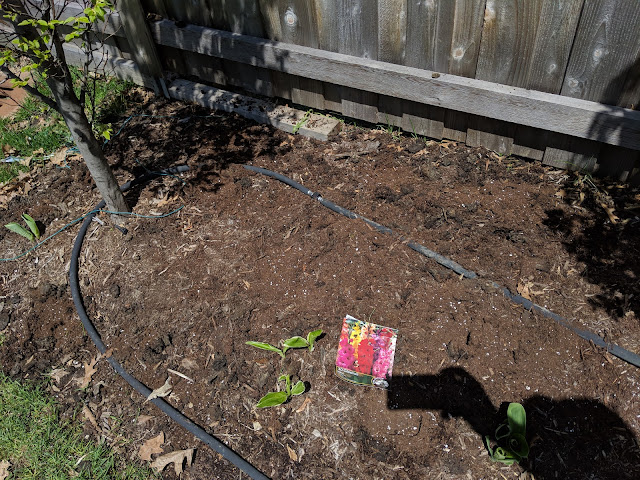 The two varieties of orange Dahlias that I posted about a few days ago aren't the only flower that we planted recently.  The Dahlias aren't bulbs, technically.  They're tubers.  The flowers (or...hopefully soon-to-be flowers) here in this photo are 30 Gladiolus.  Turns out, Gladiolus aren't bulbs, either.  They're technically corms.  What the heck is a corm?  I had no idea, but I found this post that walks you through bulbs vs. corms vs. tubers.

These are the first corms that we've planted and the first time I've planted gladiolus.  I don't know why, but they've never been something that I've been drawn to over the years despite the fact that growing up I attend the Glad-Peach Festival in Coloma every year.  There were always tons of gladiolus.  But not that many peaches.

The Bird helped me plant there and I put them all in the bed between the last and the second to last Hornbeam on the North fenceline.  I decided to not plant them in rows, but more in a scattershot layout.  They'll get Sun most of the day, I think based on the angle of the Sun hitting them before the foliage of the Frans Fontaine Hormbeams take over.
#hornbeamhill backyard bulbs Corms cut flowers garden diary Gladiolus