This is maybe my favorite version of Bob Dylan.  Maybe.  I don't mean the song, specifically.  But...it is really great.  It is 'One More Night' from Nashville Skyline which was released April 9, 1969.

But, by saying *favorite* Bob Dylan, I'm talking about how the whole thing comes together.  The song, the voice (according to some...he stopped smoking (???) and you can hear it in his voice.  I mean...those people who say to you:  I hate Bob Dylan's voice.  That voice, etc.  Just have them play this video above and then see if they stand by their answer??!?), the sound and the flow of the entire record.  Just really great.

I remember the first time I had ever heard of Nashville Skyline.  My friend Neil (son of Super Coach Jer, sometimes AKA Mitch) and I went to Threshold Records in Tinley Park.  And after nosing around some vinyl, Neil plucked Nashville Skyline out of the CD bin and brought it home.

Up until then, I was clinging to four Bob Dylan records.  Blood on the Tracks/Blonde on Blonde/Time out of Mind/Love & Theft.  Then, Neil, who I've taken many musical cues from over the years expanded my Bob Dylan horizon a little bit with Nashville Skyline and I've never looked back.  Well...there's a second step here, really.  After Neil bought Nashville Skyline, I mentioned it to my brother-in-law Shaun (who was one of my favorite radio guests....oh...we haven't talked about my radio show?  More on that someday!), who, at the mention of Nashville Skyline, instantly chimed in:  that it was his favorite Dylan record.

All of this happened more than 15 years ago.

And I haven't looked back.

Sure, I have A LOT of favorites from Bob Dylan and discovered them in different ways:

The Man in Me from The Big Lebowski.
Here Comes Santa Claus (a cover) from Christmas in the Heart.
If Not For You via George Harrison.
Make you Feel My Love via Adele.
Reintroduced and fell in love all over again with Forever Young when Disneyland used it in their anniversary commercials.
Mississippi via Sheryl Crow.
When I Paint my Masterpiece via the Band.
When the Ship Comes In via the Clancy Brothers at the 30th Anniversary Concert. (You never thought you'd hear Dylan with an Irish accent, didja??)
My Back Pages via Dylan and the Dead and, of course....Roger McGuinn at the 30th Anniversary Concert.
Heck...that whole record!

But, I keep coming back to Nashville Skyline.

The sound.  The songs.  Somewhere in between the folk days and The Band's Basement Tapes.  This fits in there.  To think...this record came out four months before the Woodstock festival.  A very different vibe going on - and one that I am drawn to over and over.

Rolling Stone reviewed the record and remarked that the artist was smiling on the cover.


Bob Dylan’s ninth album poses fewer mysteries and yet, paradoxically, offers greater rewards than any of his previous work. Its only difficulties aren’t metaphysical or interpretative — indeed, the beauty and openness within is kept almost rigorously simple in genre — but rather those of taking the artist’s new-found happiness and maturity for exactly what they appear to be. That smiling face on the cover tells all — and isn’t it wonderful?

And I have my lifelong friend Neil to thank.  That one visit to the record store changed the trajectory of my musical experience.  With the pace of life and how busy we all are, it isn't easy to find time to remind people that they had an impact on your life, but this feels like one of those times.  Thanks, Neil.  Thanks for your friendship and musical tutelage.  Besides those Motley Crue years in Junior High, you've got a pretty good track record.

That's what friends are for, right?

Oh...if you're wondering....my favorite song one record?  As I mentioned in the first sentence, it isn't 'One More Night'.  Love that song.  But, this one - 'Tell Me That It Isn't True' is the best track on the record.  I dare you.  Come at me. 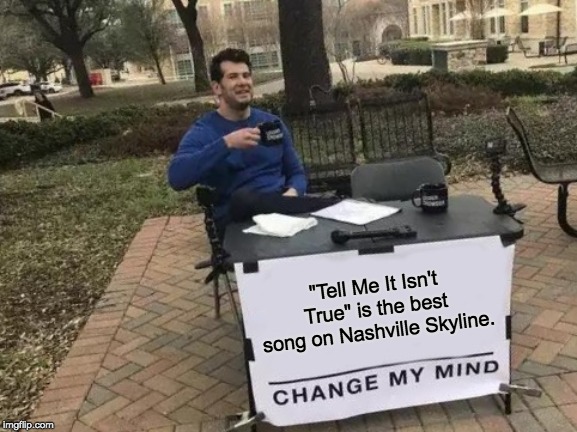 Here it is for those of you who aren't believing me.  Go ahead...try to change my mind.