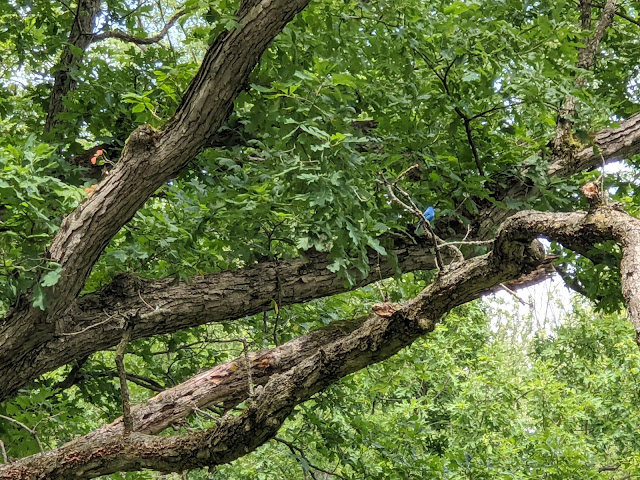 On a recent morning, we were out at Waterfall Glen - on the Waterfall side - and as I was walking back to the van in the little parking lot, I heard this bird before I saw him.  He (didn't know it was a *he* at the time) was making some noise and I looked up and with his blue coat, I couldn't miss him.  I grabbed my phone and zoomed in as best as I could and took the photo you see above.  I don't think that I've seen such a vibrant blue bird in our area, so I knew that I had to figure out who it was.

It didn't take long - just simply putting [bright blue bird northern illinois] into the Google machine and you get this featured search snippet:

I now knew what it was:  an Indigo Bunting.

So, when I got home, I turned to my bird book and quickly looked it up.  Sure enough...take a look at that photo in the book: 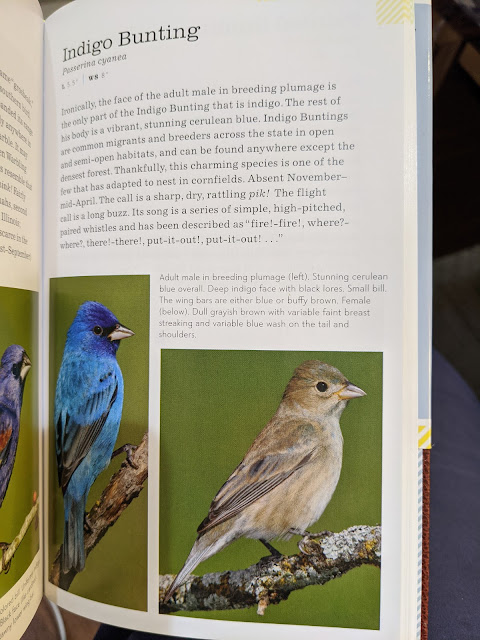 It is an adult male that I saw with what the book "cerulean blue" and I'm pretty confident that this is the first Indigo Bunting that I've seen in my life.  Or...rather...the first *male* Indigo Bunting.  The female looks really common, so perhaps it is likely that I have come across her before.

I found this pdf from the Illinois Department of Natural Resources that provides a bit more info.  From that document, we find out that it is classified as "common" - which is...kinda disappointing to me.   And more:

...A bird of open areas, it can be found in cultivated fields but is more common near bottomland forests. Its song can be heard throughout the day in the spring and summer. The song includes different pitches usually with paired notes, like “sweet‐sweet” or “chew‐ chew.” The indigo bunting migrates at night, with spring migrants beginning to arrive in April. The males arrive before the females. The breeding season occurs from May through mid‐August.

.... Most indigo buntings winter from Central America to Colombia in South America, although a few have been seen in the winter in the southern one‐third of Illinois.

They migrate at night.  And, they head to Central America to hang during the Winter - which is confirmed by this migration map.

I don't keep our bird feeders full and active during the Summer - as I'm not interested in the pests that come with the warmer weather like mice/rats, raccoons, ants and what-have-you.  I battle the squirrels all Winter, but figure they'd be even more challenging during the Summer.  But, maybe I should be keeping them active to try to see birds like this.
Bird Nerd bird watching birding birds Waterfall Glen
Location: Waterfall Glen Forest Preserve, Lemont, IL 60439, USA