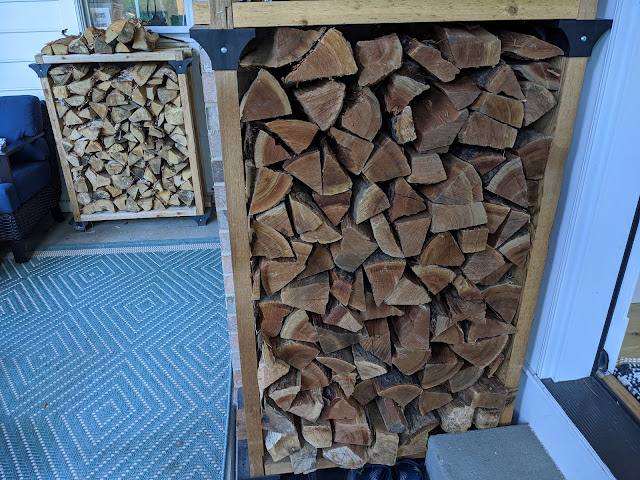 Yesterday, I posted a couple of photos of a lot of the three face cords of firewood that we had delivered earlier this week.  Those three racks are a combo of Birch, Cherry and Oak Firewood and two of them were built this Summer in preparation for the delivery.  In that post, I mentioned that there are the two additional - indoor racks - that I also filled.  This post shows off those two racks.

Well...it shows off all of one of them (the one in the background that is loaded with Birch) and half of the rack in the foreground (That is loaded with Cherry firewood).  The rack in the foreground is a two-level rack - you can see what the full thing looks like here - but we're using the top section as a sort-of plant stand with various potted plants.  So, for now, we're only filling this rack about half-way.

When the weather turns, I'm sure we'll move the plants indoors and I'll take that top part of the rack and fill it with Oak firewood.  That way, we'll have three 'indoor' sections of our seasoned firewood - one for Birch, one for Cherry and one for Oak.

We ended up adding Eze-Breeze windows to the screened porch - which I don't seem to have posted about - so we're hoping that we'll be able to extend the season out here a little bit.
firewood firewood consumption firewood planning firewood rack screened porch
Location: Downers Grove, IL, USA