Last week, I posted a photo of my horizontal cordon espalier Greenspire Lindens as they were about to break bud for the Spring. The trees are starting to really fill out and look like I wanted them to look - now in their fifth growing season.  But, last year something happened.  These trees were swarmed by yellow jackets.  And, after a little bit of research, I discovered that the trees were inhabited by Linden Aphids - which is (apparently) quite common.

Last Fall, I took the first step to trying to treat the Aphid infestation - and figured out that there are two ways to treat trees:  with either persistent contact treatments or systemic treatments.

Persistent contact sprays - they kill what they contact.  And they'll last from a few hours on the leaves up to a few days.  They're good for more immediate results, but they have some downsides in that they may harm non-targets (meaning...they will kill not just aphids).

That's what I tried to use November.  My thought was that the Aphids were going to hang on the tree all Fall/Winter - so let's kill as many of them as we can.  But, in that post, I also talked about the other kind:  systemic insecticides.  That means that they can 'move through' the tree.  There are systemic sprays and also soil-applications.  These take longer, but can reach Aphids that sprays can't.  There's also a little bit of 'rolling the dice' though because you pour the stuff in the ground and then just kind of HOPE that the tree is taking it in via the roots.

When the leaves of the Lindens opened, I saw some tiny, fuzzy white spots on the back of the leaves - which I am guessing are Aphid nymphs.  So, it was time to go to battle.

And I chose to go by air and land.

I pulled this Systemic Soil-Application insecticide off the shelf from Home Depot and took a look at the details.  The front of the bottle lists Japanese Beetles, White Fly, Gypsy Moth and the Emerald Ash Borer on the front.  It also contains a tree fertilizer.  But, no Aphids mentioned. 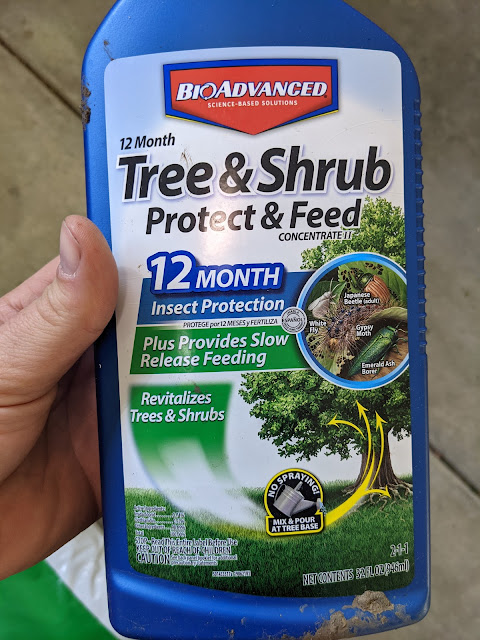 But, I turned the bottle over and there were other insects listed including.....yep...you guessed it:  Aphids.  So, I brought this one home and mixed up a couple of gallons of water with the right amount of the product, moved some of the mulch back and dumped it around the tree base. 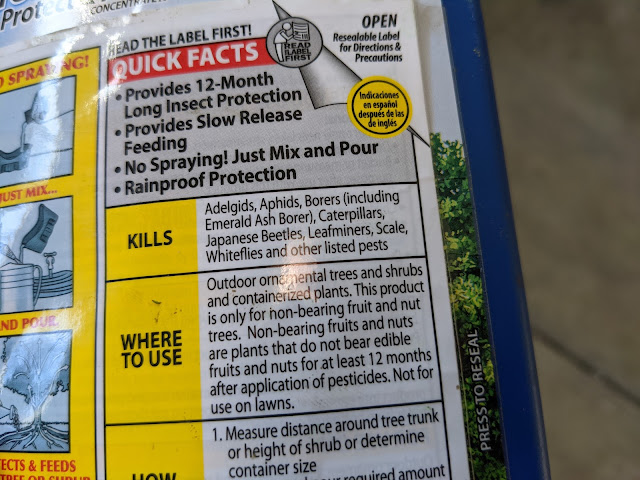 I mentioned that I was going to war with these Linden Aphids two ways:  Air AND land.

As for the air, I also decided to apply a persistent contact spray to try to kill what I could get to as the leaves unfurl from their buds.  I pulled this tree, shrub and rose spray on the end of our hose - because it listed Aphids right on the front.  The front says that it provides 2 weeks of protection, so I ended up using about half of the bottle and will use the other half close to the end of the month. 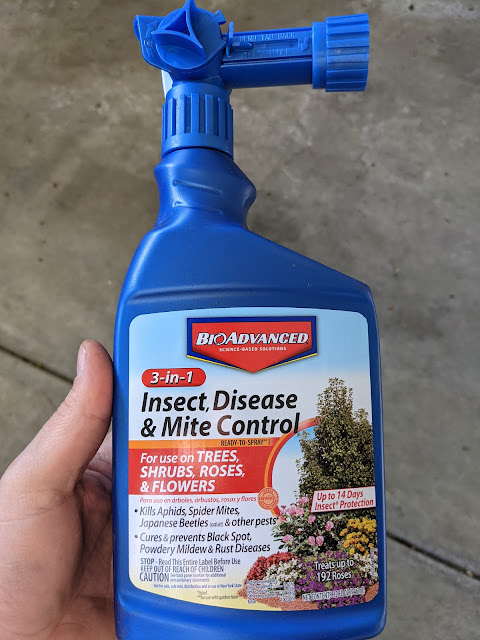 My plan is to also buy a hand-spray bottle of insecticide soap in a couple of weeks.  Something that I can spray with one hand and hold up the underside of the leaves with the other.  That way, I can look at the leaves and ensure contact with all the aphids that remain after the application of these two other BioAdvantage products.
A note about my 2021 to-do list.  #15 on the list is to 'take the next step with espalier' - which means doing a couple of things:  adding trees, but I also mention that I need to stay on top of the Aphids on these Greenspire Lindens.  In terms of scoring, this one helps check the box, but more to come.
2021 to-do list aphids espalier garden diary greenspire lindens insecticides insects linden trees
Location: Downers Grove, IL, USA