I collected a couple handfuls of Oak tree acorns (pretty sure they are from a Red Oak) as a project to see if I could work into seedlings next Spring.  There's a lot of info out there about how to plant Oak trees from acorns, but this YouTube video was the most helpful for me.  It isn't super fast-moving, but if you have the time, it is a nice overview.  The steps of growing your own trees start with collecting acorns.  From there, you have to test them for viability - using the 'float test'.

After cleaning them up (removing their tops), you dump them in a bucket of water.  The ones that float aren't viable.  The ones that sink...usually ARE viable.  (the video recommends doing a couple of float tests to be sure...)

So, after collecting these acorns, I dumped them into a bucket.  And...not ONE of them appears to be viable.  All floaters. 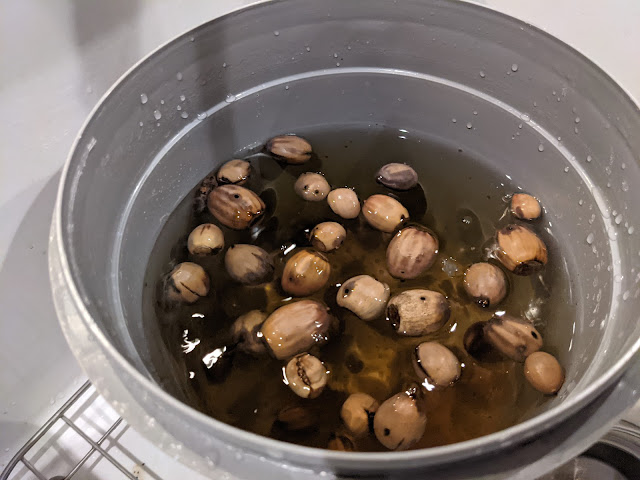 I noticed that most of them have these little in holes on the sides of the acorn.  See the photo below: 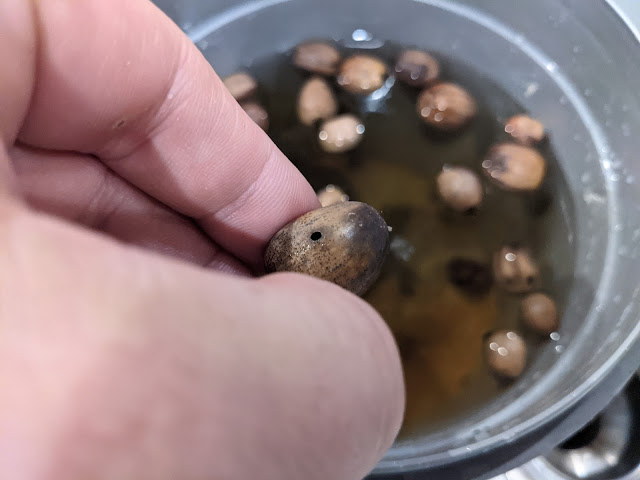 Well...I learned something:  those are caused by Acorn or Nut Weevils.  They lay their eggs in the acorns and the larvae feed on the nut.  Jerks.
What can you do about it?  Sounds like - as a homeowner - really nothing.
I'm going to chuck these in the garbage can and go scavenging for some other acorns on my walk(s) around the parks in Downers this weekend.
BTW...that 'float test' is the same thing that I did to the Kentucky Coffee Tree seeds earlier this Spring. The biggest difference is that *those* seeds (Kentucky Coffee Tree), do their Winter stratification ON THE TREE in their pods.  Same as Catalpa tree seeds.  Oaks (and Walnuts - more on that soon) need help in getting in the ground (or something similar) for 120+ days before they'll germinate.
Acorn Weevils acorns fall projects float test garden diary new trees nut viability nuts oak trees oaks pests seedlings
Location: Downers Grove, IL, USA